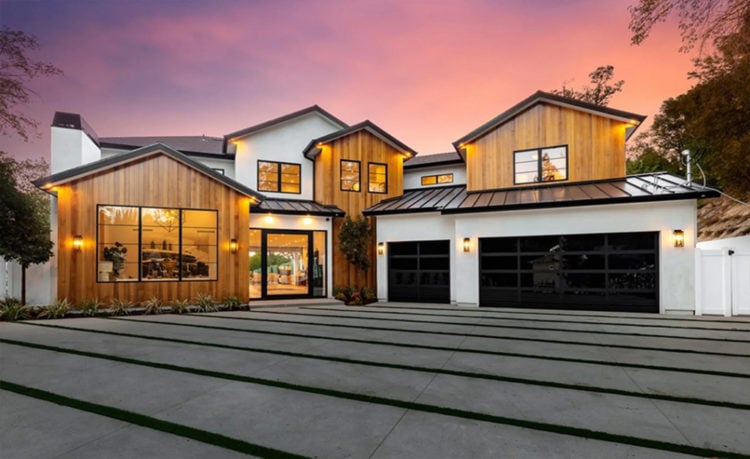 Luke Kennard is a professional basketball player who began his career in 2017. Before becoming a professional player, Kennard played college basketball for the Duke Blue Devils from 2015. He was then drafted 12th overall by the Detroit Pistons in the 2017 NBA draft. Kennard played for the Detroit Pistons until 2020 when he was traded in a three-team trade to the Los Angeles Clippers. In his personal life, Kennard briefly dated Savannah Chrisley, who is one of the cast members of the television reality series ‘Chrisley Knows Best.’ However, Kennard is currently single and enjoying the bachelor lifestyle. Now that he is playing for a Californian team, it makes sense that he has decided to put down roots in the state. The place that Kennard has decided to call home is the neighborhood of Tarzana, and this is where he has purchased a new property. Here is a look at the basketball player’s brand new $5.5 million home in Los Angeles. Kennard’s $5.5 million home is located in Tarzana, which is an area that was once overlooked but is now an increasingly popular neighborhood of Los Angeles. It is a five-bedroom, 7.5-bathroom property that measures 7,015-square feet internally. The house is brand new, as it was only completed earlier in 2021. It sits on a lot of 0.55-acres in the San Fernando Valley community. The modern mini-mansion is on an elevated plateau that offers views across the treetops. Inside the Five-Bedroom Property in Tarzana

Throughout the house, there are various living spaces. These include a formal living room, a formal dining area, a separate family room, and a second-floor den, says Dirt.com. Both the living room and the family room have fireplaces, while all the living and dining spaces have professionally crafted woodwork and custom built-ins. The formal dining space is a galley-style room that opens out to several other rooms on the ground floor. There is sufficient space in the dining room to accommodate a 12-seater dining suite. Above the dining table, there is a wooden panel on the ceiling, from which hangs a modern, bronze pendant light. As you would expect for a new property worth $5.5 million, this house has a large and stunning kitchen. It features clean lines, custom wooden cabinetry, wood flooring, ceiling spotlights, and black marble countertops. There are two large islands in the kitchen, both of which have waterfall marble countertops in black. A large picture window looks out from the kitchen to the grounds. At the far end of the kitchen beyond the islands is another lounge area arranged around a modern fireplace. This room leads through to an informal dining area in a light and airy alcove that has windows on three sides. There are two further rooms on the ground floor of the property. One is an office with an ensuite bathroom that Kennard could also choose to use as a staff or guest bedroom. The other is a screening room that boasts a dramatic lighting program. In the screening walls, there are comfortable sofas set over two levels, and the walls and ceiling are both black. On the upper floor of the two-story house, there are four guest bedrooms. All the guest bedrooms have a private bathroom, and each has a paneled accent wall. Although Kennard is currently single, there are enough bedrooms if he decides to start a family in the future. Until then, he has ample accommodation for friends and family to visit and spend the night. The master retreat offers a spacious bedroom with a fireplace, a vaulted ceiling with exposed wood beams, and doors leading out to a private terrace. It also has a spa-style bathroom with white floor tiles and dramatic black marble walls. There is also wood paneling behind the soaking tub.

The Exterior of the Basketball Player’s Impressive Bachelor Pad

Access to Kennard’s Tarzana home is via a long, gated driveway that leads to wide slate-covered steps leading to the front door. The exterior style of the house is the modern farmhouse style that has become increasingly popular in California. Some sections of the house have a white stucco coating, and others are wood-paneled. While some aspects of the structure have gabled slate roofs, other sections have tinted glass paneling. There are black-framed windows throughout the property. Most of the 0.55-acres of the grounds are to the sides and rear of the property and include various entertaining spaces, a large, manicured lawn, paved areas, and leisure facilities. The grounds are surrounded by mature trees. There are two loggias, one of which is to the side and the other is to the rear. These are covered outdoor spaces for dining, relaxing, or entertaining. There is a further dining area to the outside of the property’s rear and an outdoor kitchen with a grill and breakfast bar-style seating. To the far side of the garden is a large infinity-edged pool with a separate spa. A paved area surrounds the pool, with one section of the paved area devoted to an outdoor lounge space. To the other end of the pool, there are loungers set up for relaxing in the sun. From the pool and spa, there are treetop views across the surrounding landscape. The garden also boasts a small pool house with a lounge area, a separate kitchen, and its own bathroom. There is wood paneling to the walls in the lounge, while the small kitchen has all basics for making a meal. The bathroom has hexagonal white tiles on the wall, a vanity unit with a sink, and a walk-in shower with glass doors. Although this structure is currently used as a pool house, it is set up in a way that there is the option to use it as guest accommodation.