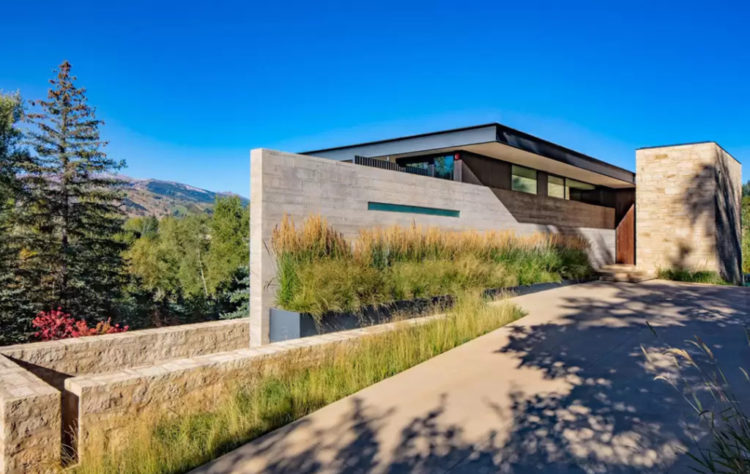 Some entrepreneurs struggle to make a success of their business, while others achieve greater success than they could have ever dreamed. Due to the success of their business, they become billionaires, which means they can go on to buy stunning homes. One person who has done this is Russ Weiner, the founder of Rockstar energy drinks. Since he founded his company in 2009, Russ Weiner has accrued an estimated net worth of $4 million. Although he is based in Florida and his company is based in Las Vegas, one of the ways he spends his fortune is buying real estate along both coasts of the United States. He has also bought homes elsewhere in the United States, including an estate in Aspen, Colorado. It is this home that Weiner has recently put on the market for $39.75 million. Here is an overview of Weiner’s Aspen estate. Russ Weiner’s home in Aspen, Colorado, was designed by Aidlin Darling Design and built in 2014. It is a stone and steel structure that boasts panoramic views of the Aspen Mountains thanks to the floor-to-ceiling windows throughout the house. Internally, the house measures 9,641-square-feet and has seven bedrooms and nine bathrooms, in addition to various living and public spaces for relaxing and entertaining. The property sits on a sizeable lot of 0.97-acres. Weiner bought the estate back in December for just $21.7 million. Now, the property has been listed less than a year later for a staggering $39.75 million. However, buying the Aspen estate is not the only option. It is also possible to rent the property either as a vacation or permanent residence. For those who want to take a vacation at the mansion, it is available as a high-end rental for $20,000 per night. If someone wants to live there, the price tag is $250,000 a month. The main public space on the mansion’s lower floor is a great room that comprises a living room, dining area, and kitchen. There are large glass windows overlooking pine trees in the double-height living room section of the great room, a large L-shaped sofa, and two armchairs arranged around a glass coffee table. Just of the living room is the dining area, which is a dingle-height space. It has an aquarium set into a stone wall, and the dining suite is set in front of sliding glass doors that lead out to the outdoor dining area. Therefore, there is a seamless transition between the indoor and outdoor dining spaces. A second dining area has dual aspect windows that overlook the forest and the lap pool. Separating the second dining room from the kitchen is a partial wood wall. On the opposite wall, there is sleek dark cabinetry and high-end appliances. To the center of the kitchen is a long, narrow island with a white stone waterfall countertop. The island has stools running along one side for informal dining. In addition to the public spaces, there are several other leisure and entertainment rooms on the property’s lower floor. These include a lounge with a bar, a home theater, a spa, a yoga room, and a wine room. Upstairs, there are seven bedroom suites, all of which include their own ensuite bathroom. The Exterior of the Aspen Property

From the outside of the property, there are stunning views of the surrounding forests and mountains. The grounds provide ample space for various dining, leisure, and entertaining features at just under one acre. One of the best features of the gardens is an 80-foot-long lap pool that is ideal for both exercise and leisure purposes. There is also a natural stone hot tub for some outdoor relaxation. Another excellent feature is an outdoor kitchen and dining area that is perfect for entertaining friends and family. The Aspen estate is far from being the only multi-million property that Weiner has bought and sold in recent years, as he has become known for buying and selling houses. He mainly focuses his real estate activities in Los Angeles and South Florida. The energy drinks entrepreneur owned a beachfront house in Hermosa Beach, California, that he sold last year for $14.3 million. In August 2021, he also sold a Beverly Hills mansion that was once owned by Madonna for $29.5 million. Despite selling several homes in California, Weiner has retained two Beverly Hills mansions in his real estate portfolio, both of which are in the Beverly Park enclave. One of the mansions was purchased by Weiner in 2007 for $15 million. The other was bought in early 2015 for $18.6 million and is currently on the market for $27.9 million. In Florida, Russ Weiner bought two Palm Beach properties for $33 million. He bought them from Tiger Woods’ ex-wife, Elin Nordegren. Just a month after buying these properties, Weiner sold them for $48.2 million to billionaire Robert E. Smith. The two Florida properties that Weiner has retained have previously been listed but did not sell. One was an oceanfront pad in Delray Beach that he paid $11.6 million for in 2009. The other is a showpiece home along Miami Beach’s waterfront that be bought for $19.5 million in 2016. When the properties were listed in 2019 for $35 million each, neither sold. Recently, Russ Weiner has splashed out $35 million on more Florida real estate. He bought a 1.5-acre vacant lot in Miami Beach, although it has not been revealed what he intends to do with the land. The businessman also bought a house with several buildings sitting on a 2-acre lot just down the street from the vacant lot, says Dirt.com. Between the two Miami Beach lots he has purchased is another property measuring just short of one acre that includes a house. The owners of the lot are currently divorcing and are allegedly facing foreclosure. It is rumored that Weiner intends to acquire the lot. If he seals the deal, he will then own three neighboring lots totaling around five acres and consisting of two properties and several outbuildings. It is unknown what he intends to do with his acquisitions.