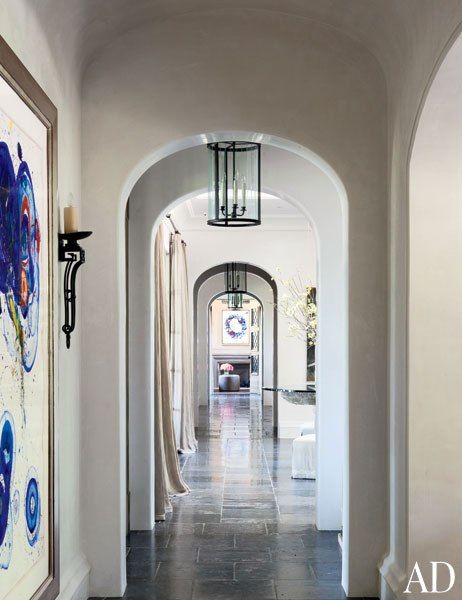 While the long hallway offers the perfect spot for the kids to ride their bikes inside, it’s highly unlikely they are allowed to. Antique Belgian bluestone, which was used in the foyer and on the staircase, continues through here. The lanterns were designed by the couple’s talented interior decorator, while the sconce on the left is by Paul Ferrante. Be sure to check out the arches, which were likely added to break up the long hallway into a more acceptable length. The huge painting on the left is also by Sam Francis. (You can see his other work at the end of the hallway, where it sits over the library fireplace.) 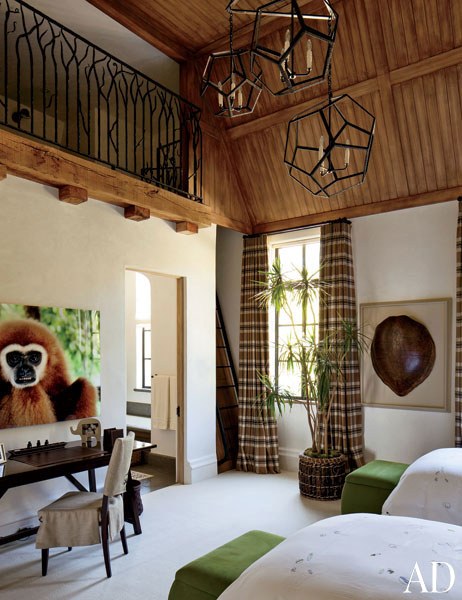 Despite the fact that the mansion has 5 bedrooms, it appears that John and Ben share a room. Surprisingly, the room is not decorated in a football theme. Instead, it appears to be jungle themed. The wood ceilings continue in here and are accentuated by the unique light fixture that was designed by the interior decorator. On the back wall, a framed tortoise shell takes center stage. The photo of the lemur (I think) on the left adds to the jungle theme.

After waiting more than four years for the house to be completed, you’d assume that Tom, Gisele, and the kids would be ready to settle into the mansion for the long haul. You’d be wrong. Not long after showing off the property in Architectural Digest, Tom and Gisele put their custom-built dream home on the market for $50 million, much to the surprise of many in the real estate industry. Apparently, the couple wanted to move out of LA completely and settle in Boston, which isn’t far from Gillette Stadium, where the Patriots (and Tom) play.

The property sold within a couple months. So, who’s the proud owner? It’s none other than Dr. Dre. The final selling price was $40 million, which is said to be exactly what the couple spent building the house.

How to Decide Between a Closed Layout Vs. an Open Layout

Can You Drain a Sink into a Toilet Vent?

How to Prepare Your Outdoor Walls for Warm Weather

How to Make a DIY Lamp Shade

How to Paint Wood Paneling With No Sanding