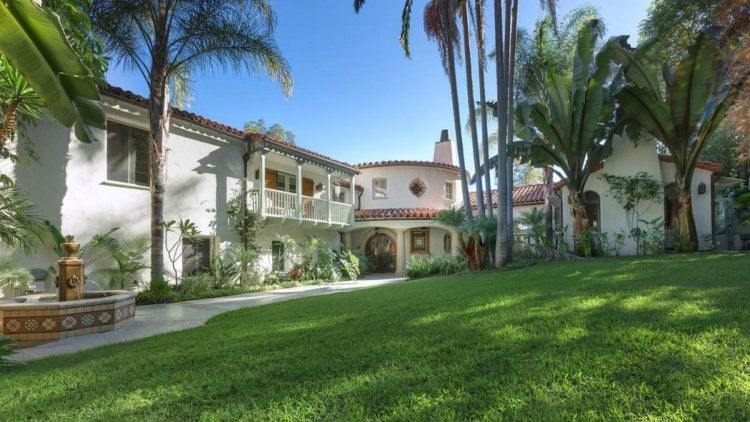 Tyra Banks is a model, television personality, producer, actress, businesswoman, author, and occasional singer. She has enjoyed many successes in her career, including becoming the first woman of African-American descent to feature on both the covers of Sports Illustrated Swimsuit Issue and GQ. One of her career highlights was creating and presenting ‘America’s Next Top Model.’ Tyra Banks is also one of only 17 models ranked by MODELS.com as a Legendary Supermodel. Due to her success in many fields of fashion and entertainment, Celebrity Net Worth estimates that Tyra Banks’ net worth is $90 million. Despite having this fortune, Banks is a frugal woman, and her accountants once had to encourage her to spend more money. Her fortune has allowed her to live in a luxurious property in Beverley Hills, which she has now put on the market. Tyra Banks bought her Beverley Hills home in 2004 for $3.085 million. Since she has lived in the property, it is estimated that Tyra Banks has spent a further $2 million on improvements to tailor the home to her tastes and needs. Now, she is selling the villa estate for $7.75 million. If it sells for the asking price, she will make a profit of more than $2.66 million. The Spanish Colonia-style villa was built in 1926, and the property features white-washed walls and a terracotta tile roof. A paved pathway leads through a lawned area with palm trees to the front door of the property. Some interesting features of the property’s exterior include a section with curved walls, the arched windows, and interestingly shaped windows. According to Home Stratosphere, this humongous property offers more than six thousand square feet of internal space. It consists of several formal rooms, a library, a sunroom, a media room, a chef’s kitchen, a gym, a maid’s quarters, and multiple bedrooms, including an impressive primary suite. In the main living areas, the high ceilings, which are vaulted and beamed, add a spacious feel to the rooms. The white walls, large feature windows, and neutral furnishings also give the rooms a light and airy feel. Wrought iron candelabras, metal wall lights, and wooden flooring are features that are fitting to the Spanish villa-style of this property. There is further seating in the family room, which is a little more colorful than the rest of the house. While most of the house is decorated in neutral tones, this room features a pastel blue on the walls and a large, blue corner settee. The in-built cabinetry along one wall of the room houses the large television, some shelving, and cupboards for storage. On the ground floor, the property is split level, which makes the space more interesting. A few steps are leading down to the stylish dining room, which is large enough for a table that seats eight people. French doors are leading to a sunroom flood the dining area with light. The sunroom is a relaxing space where the residents of the house and their visitors can enjoy views out to the garden. There are floor-to-ceiling windows on three sides of this room, and two sets of doors leading out to the exterior entertaining space. A huge ceiling fan means that people will not get too hot, even when the sun is out. The neutral color scheme continues in the chef’s kitchen, which is perfect for those who want plenty of space to experiment with food. A double-range cooker is a focal point at the far end of the kitchen, while the center of the kitchen is dominated by a large island with in-built storage. Although the kitchen has a traditional feel, it has all the modern amenities that people expect, and there are plenty of units for storage. In the master suite, the bedroom is so large that there is enough space for a separate seating area on the far side of the room. The neutral color scheme and dual-aspect windows mean that the room is flooded with light. Large rugs cover parts of the wooden floors, and this adds an element of warmth to the room. The master suite boasts a massive walk-in closet, which is hardly surprising considering Tyra Banks’ links to the fashion industry. The beige cabinetry features multiple shelves, drawers, a dressing table area, and plenty of hanging space. There is also an island with storage in the center of the room, which is lit by the overhanging chandelier. While many homes have a poky little office space in the corner of the house, the home office in this property is as large as a living room. There are four arched alcoves with fitted shelves in the wall facing you as you enter the office. The multiple large windows mean that this is a light and spacious workspace. To the exterior of the property, the features are just as impressive as the interior. Most noticeably, there is a large outdoor pool with an outdoor kitchen, a fire pit, and seating for 12 people. It is designed as an area for both family fun and entertaining guests. There is also an outdoor casita and a covered patio. The latter has a tall cathedral ceiling and floor-to-ceiling windows. It is a fantastic entertaining space for any time of the year, as there is cushioned seating around the room, a large fireplace, and a wall-mounted television. If you can afford the price tag of $7.5 million, then this property has plenty to offer, and it can give you an enjoyable lifestyle. It boasts spacious living areas, luxurious sleeping quarters, a kitchen that is ideal for foodies, and even areas for the homeowner to work. Furthermore, this Beverley Hills villa is the perfect home for those who enjoy entertaining. There are areas both inside and outside the property that are designed for having family and friends around.