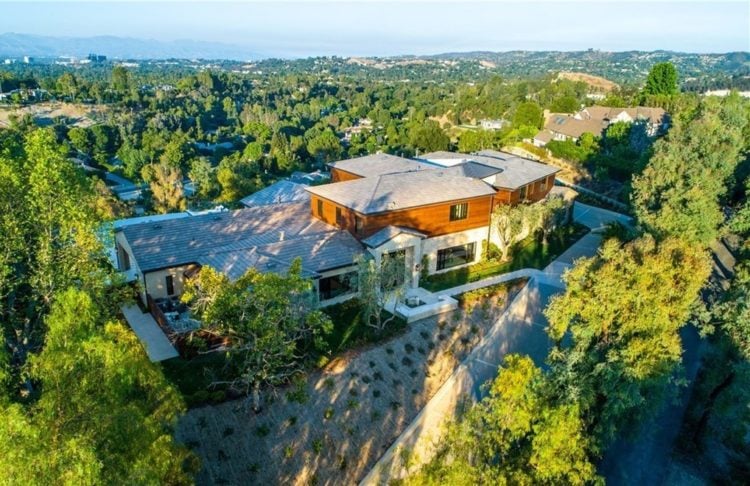 A lot of people wish that they could afford just a fraction of the things that Will Smith and his wife, Jada Pinkett Smith, can afford to have. That point was driven home even more recently when they purchased their ninth home, a brand new mansion in the Hidden Hills area of California. By the way, if you’re thinking that they have lived in eight homes and this is the ninth home they moved into, you’re only half right. They actually own eight other homes in addition to this one. All of these homes are strategically located in different areas around the country, giving them the opportunity to go virtually anywhere in the country they want to go and still be at home. So, what is it about this new house that overlooks the San Fernando Valley that makes it so special? As previously mentioned, it’s brand new. In fact, it was just built last year. At the time it was built, there weren’t even any takers. The individual that owned the land decided to have a mansion built on it and then immediately put the house on the market, believing that he would be able to get far more money for it than he spent on building costs. At first, he was asking $12.2 million for the house but the Smiths were able to snag it for a little bit less, with their final bid coming in at $11.3 million. As far as the house itself is concerned, it features a modern day ranch house floor plan with a twist. The real estate agent actually referred to it as an updated Napa Valley style home. It has a colossal entryway that allows you to see throughout the rest of the house. The home is over 10,000 square feet and features six bedrooms, all of them with their own bathroom. There’s also an additional full bathroom that stands alone, along with a half bath. Luxury at its Finest

One of the best features of the home includes the main bedroom, which not only comes with its own fully functional bathroom, but also two separate dressing rooms, a fireplace, and a sitting room. If you think that’s impressive, consider this fact. That same bedroom also has its very own refrigerator and a full coffee bar, all located inside the bedroom itself. Imagine what it must be like to wake up in the morning and be able to brew your very own cup of coffee without even having to leave your bedroom, or to be able to grab a snack out of the refrigerator in the middle of the night without having to trek down stairs in the dark in order to do so. It’s something that a lot of people are often critical of because these types of things are considered luxury items, sometimes excessively so. The point is, there’s probably not a single person alive that wouldn’t enjoy having these types of amenities in their own bedroom if they’re being completely honest with themselves. The Smiths can afford whatever they want, so they decided to have the house outfitted the way that they wanted it to be. There’s certainly nothing wrong with that. More Than Meets the Eye

Of course, that main bedroom suite isn’t the only thing appealing about the home. The downstairs floor plan is very open, so much so that you can literally stand in the hallway and see everything from the living room to the kitchen and beyond. Of course, the home also features a fully outfitted gourmet kitchen, along with a spacious living room that has its own fireplace. If that doesn’t impress you, perhaps the in-home movie theater will. The home has its own movie theater which has been completely soundproofed. It has theater-style seating and a screen that covers an entire wall, complete with a movie theater quality sound system to go with it. There’s also a wet bar located in the same theater, making you feel like you’re in one of the finest cinemas in the entire world. The house also has a game room and it’s been outfitted with a gym that would easily rival any commercial gym that you could ever care to put up against it. In reality, this is a house that has virtually everything you need. It also has an infinity swimming pool that’s almost big enough to rival an Olympic size pool, along with an outdoor kitchen, a standalone barbeque and a fire pit. If you work your way around to the back yard, you’ll find a separate fire pit along with a basketball court and a tennis court. There’s also a sauna and a dedicated steam shower. The home itself is located in a community that houses a lot of other celebrities. As such, it is not only gated, but guarded as well. That means it provides the privacy that so many people who are in the public eye are looking for. This particular home is even a bit more private than the other homes in the area because of its location. It sits at the very end of the neighborhood on a cul-de-sac that features a driveway which is about a mile long. That makes it virtually impossible to get to unless you’re supposed to actually be there. There’s also another benefit to having a house at the end of the neighborhood which sits at the very end of a long driveway. It also makes it virtually impossible for paparazzi to snap photos, even with a telephoto lens. That’s probably one of the main reasons that the Smiths decided to choose this property in the first place. It offers them the privacy to have a relatively normal life while they’re staying there, something that celebrities constantly have to fight in order to achieve. When it’s all said and done, it’s no wonder that they decided to purchase this home. It’s beautiful, spacious and functional, plus it is in a location that’s almost perfect to cater to some of the problems that are specific to people who have made a name for themselves in the public eye.