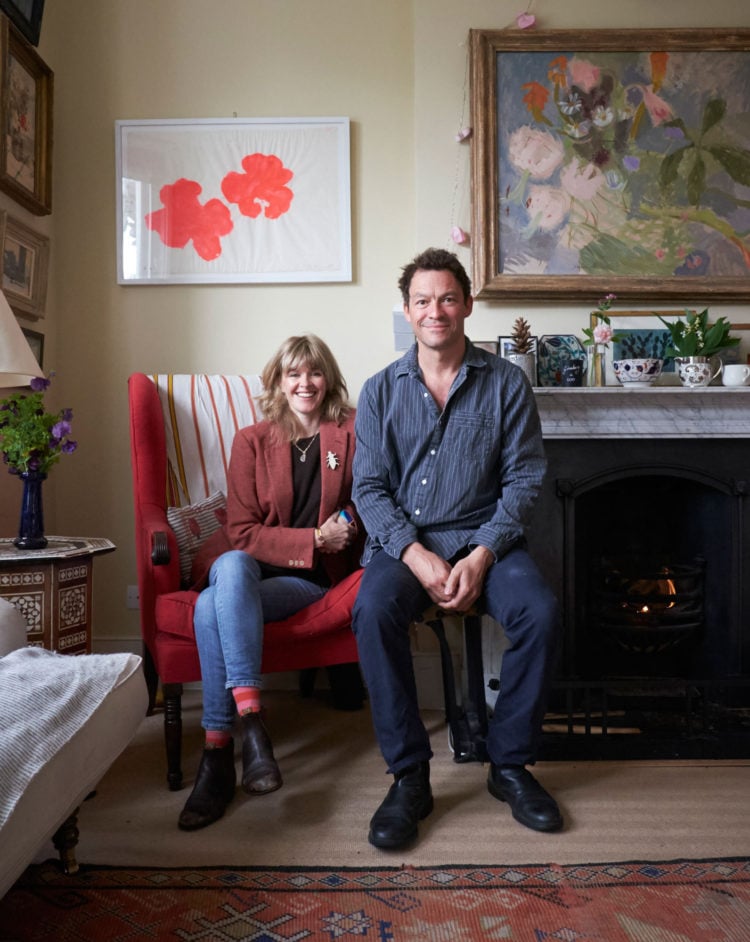 Actor Dominic West has been married to landscape designer Catherine Fitzgerald since 2010. The couple has four children together; Dora, Senan, Francis, and Christabel. West also has a daughter, Martha, from a previous relationship. West and Fitzgerald live together in a stunning 1840s home in the Shepherd’s Bush district of London, England. The couple has painstakingly renovated this property to reflect their personal tastes and showcase their memories together.

The couple’s love of color is evident before you have even entered the house. Their front door is painted a vivid tomato red which stands out boldly from the white-washed walls of their property. Step into the entrance hallway and you are met with an explosion of color, including walls that are painted tangerine and green. Despite the bright choice of colors, the home is also naturally light thanks to its high ceilings and large windows that flood light into each room, even the hallway.

The sitting room has a more traditional feel as the centerpiece is the original fireplace. Mounted above this is one of the couple’s favorite pieces of art that was a gift from a friend. Although the room is painted in a neutral color, they have added splashes of brightness with red armchairs, patterned cushions, and bright accessories around the room. There is also a botanical theme in the artwork and soft furnishings that reflects Fitzgerald’s work as a landscape designer. The sitting room is separated from the kitchen with an open doorway that is adorned with checked curtains on a pole that the family close when they want to keep the warmth from the fireplace in the sitting area.

The kitchen is both modern and traditional at the same time, but West and Fitzgerald have combined these two styles well. Again, the walls are painted in a neutral color, but cherry red is used in accents around the room, including wooden, paneled cupboard doors. Central to the room is a large, wooden-topped island that provides plenty of space for food preparation or for casual dining.

The couple’s passion for food and cooking is evident as the room is lined with bookcases filled with cookbooks. Just like in other areas of this wonderful home, artwork features on most walls. One of the couple’s favorite features in the room is a large pinboard that they have used to display memorabilia and family photographs.

An atrium provides an extra living space that is perfect for socializing and this leads directly off the kitchen. This bright and airy room is adorned with colorful Tibetan prayer flags that are a memento of West’s paragliding trip to Tibet. The family uses this space as their dining room, so it features a dining set with a large candelabra suspended from the atrium roof.

There are further examples of the couple’s mementos from their travels when you head upstairs into the master bedroom. Suspended above the bed is a patterned textile wall hanging they bought from the Grand Bazaar in Istanbul. Fitzgerald also uses the master bedroom as her workspace. Above her desk, she has a pinboard filled with family photos, including one of her wedding day to West, and memorabilia from their travels. Opposite the couple’s bed is an original fireplace, which makes a gorgeous focal point of the room. Above this, there is a large mirror and the alcoves at either side of the fireplace contain floor-to-ceiling bookcases that are filled with their books.

As you would expect at the home od a landscape gardener, just as much thought has been put into the garden of the property as it has to the interior. The garden is just as much a living space for this family as inside the home as it has been designed so they can spend time together outdoors. It is divided into sections with mature areas filled with trees, raised flower beds, lawned area, and a range of features for the family to enjoy, such as a large wooden swing. Just like inside the home, the couple has used the garden to display mementos from their travels. For example, the garden shed displays a sign saying, ‘Rue Othello’. Fitzgerald found this during a trip to Pairs and gave it to West as a gift when he was in a performance of Othello.

To take a sneak peek at the home of Dominic West and Catherine Fitzgerald, then take a look at the gallery below.