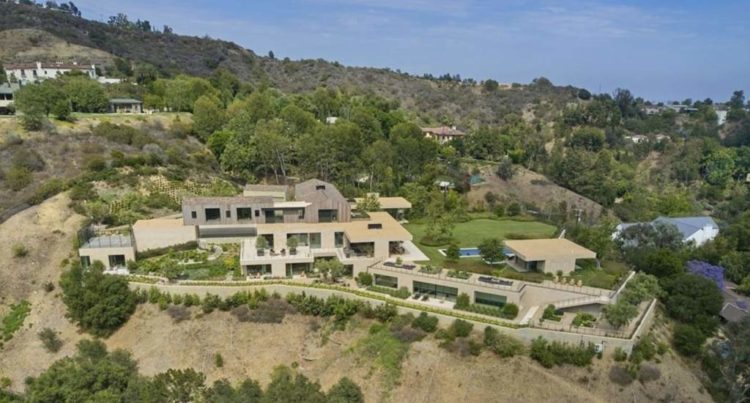 Scooter Braun is a media proprietor, record executive, and investor who was born in New York City in 1981. He is known for being a manager to artists such as Demi Lovato, Ariana Grande, The Kid, J Balvin, and Justin Bieber. Braun is also known for founding Ithaca Ventures and Schoolboy Records and co-founding RBMG Records, Mythos Studios, and TQ Ventures. Furthermore, Scott Braun is a co-owner of 100 Thieves, an esports team. In his personal life, Braun was married to Yael Cohen, a businesswoman and founder of a cancer charity. The former couple married in 2014 but divorced in September 2021. Together, they have two sons and a daughter. Braun’s success in his professional life means that he now has a net worth of $400 million, says Celebrity Net Worth. However, his personal life is less successful following his divorce, and he has now moved out of the family home. Due to his changing circumstances, Scooter Braun has been looking for a new place to call home, and he has recently purchased a $65 million mansion in Brentwood. Here is a look at the businessman’s new luxury dwelling. The property that Scooter Braun has chosen to make his new home as a single man is located in the Mandeville Canyon area of Brentwood, Los Angeles. It was originally listed for $70 million, but Braun secured the property for $65 million. Despite the $5 million price drop, it is still the most expensive property ever sold in Brentwood and the second-highest price paid in the Westside of Los Angeles. The only property sold with a higher price tag was an $83 million mansion in Pacific Palisades. Noah Walker designed the house, and he is the architect also responsible for designing Oak Pass Residence, which is one of the most beautiful modern estates in Los Angeles. Walker is also responsible for ‘Carla House’ in Trousdale Estate in Beverly Hills, and a Russian oligarch bought that property for $35 million in 2019. The house was constructed in 2021, and Jamie Bush designed the interior. Larry and Kathleen Paul are the original owners of the house, and it is they who are selling the mansion to Braun. The Pauls are part-owners of the Pittsburgh Steelers, and they are long-time residents of the Brentwood area. Internally, the house measures a humungous 19,000-square-feet, and it sits on a plot of 3.93-acres. It boasts six bedrooms and 9.5 bathrooms. The property is along a private road on a hillside position with stunning views. Some of the neighbors include crypto billionaire Jesse Powell, actress Reese Witherspoon, and investor Lowell Milken. Inside the Brentwood Mansion

Inside the mansion, three of the main materials used are wood, stone, and glass. Wooden ceilings and feature trims run throughout the property, as do stone tile floors, floor-to-ceiling windows, and sliding glass doors. One of the most impressive rooms in the house is the massive dine-in kitchen. It has wooden ceilings and floors, and the cabinetry is paler wood. Central to the main wall in the kitchen is a ceiling-height fireplace that houses a double range. Flanking the fireplace are paneled windows that run to the end of the room and wrap around the corner. In the middle of the kitchen is an enormous kitchen island with a sink, a hob, and more than ample countertop space for food preparation. The island extends to an informal breakfast bar area at one end. There is also an informal dining area within the kitchen. For more formal occasions, there is a separate dining room which is partially separated from the kitchen and lounge. It is currently kitted out with a 12-seater dining suite, above which there are two large pendant lights suspended over the table. The main living room connects the outdoor and indoor areas, as there are sliding glass doors across two walls that lead to a covered patio area. Leaving the doors open extends the living and entertaining space on the lower floor of the house. In addition to the main living and public spaces in this property, there are also spaces for leisure and entertainment. One example is the spacious movie theater. There is plenty of room for Braun to watch a movie with his children or friends, as there are comfortable armchairs and settees arranged over two levels. Of the six bedrooms in this property, the master suite is the largest. Alongside the large bedroom is a luxurious ensuite bathroom with dual vanities and a chaise-longe in the center of the room. The ensuite bathroom has doors that lead out to a private deck. The Grounds of Braun’s New Pad

Scooter Braun’s new pad offers plenty of space for guests to park, as Dirt.com says that there is garaging for eight vehicles plus a large motor court to park multiple additional cars. From the exterior, the property has the modern farmhouse look that has become increasingly popular in Los Angeles in recent years. The lowers story of the property has a series of concrete and glass blocks arranged in an L-shape. The upper story has the appearance of two wooden barn structures sitting atop the blocks on the lower floor. To the rear of the property, there are gardens designed by landscape architect Christine London. These include a series of covered and open terraces that provide multiple spaces for outdoor dining and entertaining or simply to enjoy the outdoor space. Interspersed between the terraces are various intimate gardens and manicured lawns. No matter where you stand or sit amongst the terraces and gardens, there are breathtaking views of the city and the canyon. Although there is an indoor pool at this mansion, there is also an outdoor pool. Therefore, Braun has the option to either take a relaxing swim outdoors or head outside to benefit from the fresh air and sunshine. Beyond the outdoor pool, there is a detached pool house. Another separate structure within the grounds is a detached guesthouse, which gives Braun the option to invite guests to stay while maintaining his own privacy in the main house.