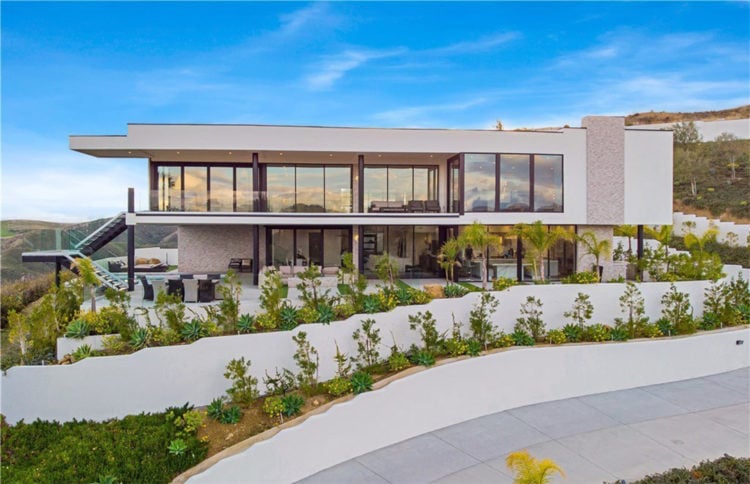 Lil Uzi Vert isn’t exactly known for being understated. Over the past couple of years, the rapper has developed a reputation for spending money almost as fast as he can make it. If his five-figure shopping sprees weren’t extravagant enough, his way of making a good first impression on dates will blow you away: on his first night out with on-off girlfriend JT, he handed her a bag full of money and asked her to take as much as she could (all in all, she thinks she managed to come away from the date with around $30,000 in cash). And then there’s the huge, $24 million pink diamond he got embedded in his forehead. Rappers, it seems, are always looking for new ways to flex. That said, his latest big purchase is a little more conventional than usual. According to Dirt, the Philadelphia rapper’s latest blowout is a $4.4 million glass-walled contemporary villa in California’s Bell Canyon. $4.4 million may sound a fortune to you and me but by his standards, it’s barely worth mentioning. So, what exactly does $4.4 million get you these days? Find out as we go through the keyhole at Lil Uzi Vert’s Bell Canyon contemporary. Before we tackle the house, let’s take a moment to wonder at the very upmarket neighborhood Vert now calls home. Bell Canyon is as about as exclusive as it gets. Located on the fringe of Los Angeles, it’s about an hour’s drive away from Beverly Hills. It’s got big gates, pretty houses, a private park, hiking trails, tennis courts, an equestrian center, and some of the wealthiest residents in California. According to Wikipedia, the median income is a whopping $230,000. Vast swathes of the population are earning upwards of millions of dollars a year. Considering Celebrity Net Worth estimates Vert’s current net worth to be around $16 million, he’s clearly going to feel right at home in this exclusive little patch of sunny LA. Lil Uzi Vert’s show-stopping new abode is tucked away at the top of a rugged stretch of hillside. A sweeping driveway leads from the stately entrance gates to a two-story, 5 bedroom, 5.5 bathroom house set on 1.5 acres of land. Offering panoramic views over the mountain and the glittering city below, there’s no question it’s a stunning location. But what about the house itself? Marketing material always tends to be, shall we say, ‘effusive.’ In this case, the agents (David Friedman and Melodi Belluomini of Rodeo Realty, in case you were wondering) have outdone themselves. The all-glass structure may be impressive, but whether or not it’s the “one of a kind architectural masterpiece” the listing describes it as is a question for another day. One-off or not, there’s no doubt its walls of floor-to-ceiling glass, sleek finishes, stone accents, and gleaming wooden floors are impressive. As you enter the house, you’re greeted with a vast, double-height combination living and dining room. The ashen-colored wooden floors contrast beautifully with the huge white sofa and wooden sideboards. The floor-to-ceiling windows that run the length of the room offer breathtaking views over the surrounding landscape. Leading away from the dining/ living room is a large, bright kitchen stuffed with goodies. The gleaming white countertops, brass accents, and high-end appliances are all striking enough, but it’s the U shape island that really draws the eye. Wrapped around a huge dining banquette and a mammoth white marble table, this is the place to wine, dine, and entertain like a bonafide rap star. The living and kitchen areas of the house may be impressive, but the rest of the house doesn’t exactly disappoint either. Overlooking the lounge is a huge, lofted gallery complete with a grand piano and full-height window that spills out onto a large, sunkissed terrace. Leading away from the terrace is a floating staircase that leads directly onto the pool area. Scattered around the house are four lavish guest bedrooms. Exquisitely decorated and equipped with sumptuous, designer private bathrooms, no one would complain about spending a night or two here. But nice though the guest rooms are, they’re nothing compared to the principal suite. With as much room to swing an elephant, let alone a cat, the master suite is a lush, gorgeously decorated room with floor-to-ceiling windows and a cavernous fireplace. Leading off from the bedroom is an equally sublime bathroom with a double sink vanity and a mammoth two-person, glass sheeted shower. If you thought the inside of Vert’s mansion was lavish enough, just wait till you cast your eyes over the exterior. The outdoor kitchen and bar area offers sweeping mountain views and the ideal setting for some alfresco entertaining. Further along, the sweeping patio that spills out from the living/ dining room is a great place for catching a few rays or admiring the heavenly views. And then, of course, there’s the swimming pool and spa. Tucked away under the overhang of the second floor, it’s undoubtedly one of the highlights of the house. Now you’ve met the house, it’s time to meet the owner. Lil Uzi Vert was born Symere Bysil Woods on July 31, 1994. Known for his androgynous style almost as much as he is his music, he’s recognizable by his multiple face tattoos, facial piercings, hairstyles, and gender-bending fashion stylings. His wardrobe has been described by Vogue as “a veritable teenage girl fantasy, furnished with strawberry-print Gucci skinny jeans, JNCO-style raver pants, Hello Kitty beanie hats, and cutesy Mickey Mouse handbags.” Regardless of what you think of his fashion sense, there’s no denying that this bling-loving rapper knows how to make a hit record. After achieving initial recognition with his mixtape “Luv Is Rage” (2015), he hit the mainstream when he featured on Migos’ Billboard Hot 100 chart-topping single “Bad and Boujee.” His debut album, “Luv Is Rage 2” (2017), entered the charts at number one. It eventually certified double platinum and earned Vert a Grammy nomination for Best New Artist. His sophomore album, “Eternal Atake,” fared similarly well, peaking at number one on the Billboard 200. Since splitting with long-term girlfriend Brittany Byrd in 2017, Vert has been in a relationship with rapper JT of the City Girls.