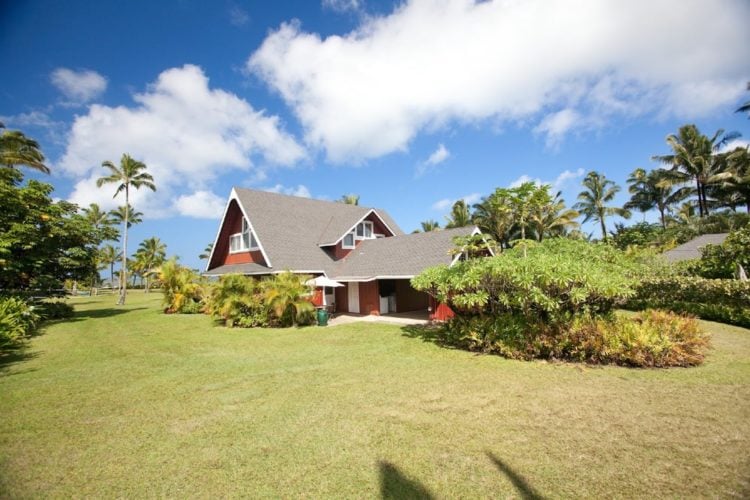 In 2016, Julia Roberts’ $28 million house in Kauai, Hawaii, sold for almost half of the asking price. She had bought it in 2011 for a little over $13 million and was seeking nearly $30 million but ended up settling for $16.2 million. Still, for a person with a net worth of over $170 million and whose role in a single movie can earn her as much as $25 million as it did in “Mona Lisa Smile,” money is not an object. She had her reasons for selling as we shall discuss, but first, let’s check out the house.

The house is described as skillfully selected in 1915 by Hans Peter Faye hence the name “The Faye Residence.” Owning a piece of the Hanalei beachfront properties was a privilege reserved for the elite members of the society, and Hans happened to be one of them. Therefore the lots, sold during an auction, were intended for building summer beach houses because they were located on the best part of the Bay. Since each buyer could only buy one lot, the witty Hans had his brother-in-law buy another lot to merge them into one.

Hans wanted his family to have more than enough space during gatherings, and the house provided the ideal getaway spot during summer. They spent their days fishing, canoeing, and hunting. Han’s dedication to his family also ensured that the house became the first in Hanalei to have electricity, thanks to an electrical power plant. Even though a century has passed, Hans would still be proud that his property is still standing in the glory he envisioned. While other lots have been subdivided, the Faye residence remains among the few expansive states. One of the strange things in the house is that it was inhabited by a protective spirit, according to The Garden Island. Faye-Papworth revealed that in one of the five bedrooms, lived the protective spirit of an elderly Hawaiian woman who guarded the families that lived there. The children believed in the spirit so much that they would go to that bedroom to talk with her.

Faye-Papworth also disclosed that they preferred putting up the home and cottage as vacation rentals before the family went there for summer. Allowing people to enjoy what Hans Faye created was a pleasure in itself. However, since it was sold off, she feared it would be no longer available for rent. She was right because while in 2012 it was listed as one of the vacation rentals under Hawaii Life Vacation Rentals, by 2017, it had been removed from the list of homes to rent.

More about the house

The property sits on more than 2 acres of land and comprises two houses: the main house and the detached house. Together, the two bungalows offer 3,800 sq. Ft. of living space, according to Los Angeles Times. The main house, painted red, has three bathrooms and six bedrooms while the detached guest house has only one bedroom and one bathroom. However, there is an outdoor shower, which makes sense since the property has 213-feet of beach frontage. Each of the two houses has a covered porch while the main house offers the spectacular view of the mauka and makai, meaning it faces the sea and the mountains. The galley-style kitchen, high-beamed ceiling and lots of windows were part of the design borrowed from Mabel and Elsie Wilcox’s Mahamoku. The big sash windows drop down into double walls while the upstairs utilizes screened windows and doors. Besides the many amenities, the property offers more than enough space to expand it depending on one’s preference.

Neal Norman, the listing agent, and director of Hawaii Life Real Estate brokers disclosed the conceptual options. For instance, the garage hale can be increased to 2,800 square feet by having the first and second floor measure 1,400 square feet each. The main hale, on the other hand, can go up to 9,000 sq. Ft. with the ground level and second level each measuring 4500 sq. Ft. Additionally, the bedrooms could be five main baths added to five, while half bathrooms can be two. Alternatively, Neal advises that if the house owner prefers a study or office, then one bedroom can also be modified. The buyer of the house

According to Celebrity Net Worth, after Julia realized that she barely spent time at the Hawaii home anymore, she decided to list it. The family has a ranch in Taos, New Mexico, a house in San Francisco, and another in Malibu, so selling one made sense. She hoped to make a killing off the sale by listing the home for $29.85 million in early 2015. Unfortunately, after remaining in the market for so long, she had to slash the price to $16.2 million, and it found a buyer, Mike Fleiss.

Mike Fleiss, is the creator of “The Bachelor,” “The Bachelorette,” High School Reunion” and “Hostel,” among other credits. He seems to have his eye on real estate in Hawaii since, in April 2016, he sold a home he had never lived in despite spending loads of money to custom-design it for $12.85 million. Mike later purchased Hanalei property, sitting on half an acre for $2.3 million. His real estate skills have seen him double his money on the property since he sold it for $4.2 million. Julia barely makes any profit off her property sales

Selling a home for only an additional $3 million after holding it for more than five years is not what real estate investors do; yet, Julia Roberts does not seem to mind not making lucrative profits off her property. In January 2016, she bought a landlocked house in Point Dume for $7.45 million, but when they sold it in 2020, they pocketed $8 million only. However, she still knows how to make a bargain, as revealed by the property she bought in San Francisco. In May 2019, the brokerage firm listed the house for $10.25 million. In September 2019, the amount was reduced to $9.65 million, and in January 2020, the “Pretty Woman” actress sealed the deal for $8.3 million.