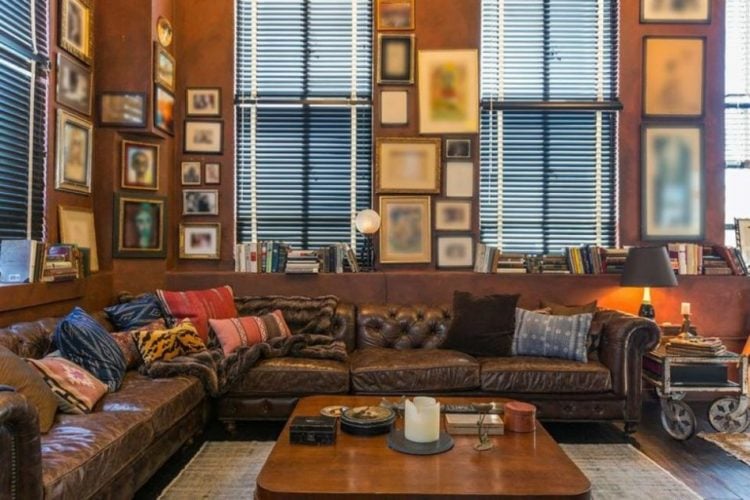 Johnny Depp is an award-winning actor who was born in Kentucky in 1963 who is also a producer and musician. He made his film debut in the 1984 film ‘A Nightmare on Elm Street’ and then became a teen idol when he appeared in the television series ’21 Jump Street’ between 1987 and 1990. He has since predominantly focus on working in the film industry. Some of his many successful films have included ‘Edward Scissorhands’, ‘Sweeney Todd: The Demon Barber of Fleet Street’, ‘Corpse Bride’, ‘Charlie and the Chocolate Factory’, ‘Sleepy Hollow’, ‘Fantastic Beasts: The Crimes of Grindewald’, and the ‘Pirates of the Caribbean’ series of films.

Due to his successful career in the film industry, Johnny Depp is now a wealthy man. According to Celebrity Net Worth, his estimated net worth is now $200million. With so much money in the bank, he can take his pick of luxurious properties. Over the years, he has bought multiple properties, including a collection of side-by-side penthouses in Los Angeles. He has now put his collection of LA penthouses on the market for $12.78 million. An Overview of the Collection of LA Penthouses

In this collection of penthouses, there are five separate multi-storied properties that side-by-side in the Eastern Columbia district of Los Angeles. Johnny Depp has acquired these properties over the years and did not buy them as a collection as they are now listed. There is one one-bedroom condo and four two-bedroom condos in this impressive collection. Although they are listed as a collection for $12.78 million, it is also possible to buy the penthouse apartments individually. If bought together, there is a total of 11,500 square feet of living space available.

Each of the properties has its own character and features. However, one feature that they all have in common is large windows that offer fantastic views over the Eastern Columbia District. These views are an excellent selling point that will appeal to many city dwellers. Another shared feature of all the properties is high ceilings. This adds to the feeling of spaciousness within the penthouses. Although each penthouse has been individually designed, there is a masculine overtone to the décor in each of the five properties. However, while some give the impression of a gentleman’s residence, others have a funkier appearance. The Living Areas of the Penthouses

One of the properties that boasts the gentleman’s residence style boasts dark stained wooden flooring throughout the penthouse. In the living room, the walls are painted brown and adorned with photographs. Chocolate brown leather sofas and a wood coffee table sitting over a beige rug continue the theme. In the same property, there is a separate reading room that shares the same design style with wood floors and brown walls. The lower half of the room is lined with bookcases filled with books, while a large wall-mounted television takes up most of the upper space of one wall.

Leading from the living room is a home office area, says Home Stratosphere. The desk is unusual as it looks more like a vintage breakfast bar or kitchen island. The lower half of the desk has the appearance of black, painted wrought iron with ornate sculpting. The desktop is polished wood, and this is filled with personal items. Vintage looking pendant lighting hanging above the desk is an interesting feature in this room. A media room in one of the penthouses offers a fantastic space for both relaxing alone or entertaining guests. The walls are painted in a subdued shade of blue, and the large windows lining one of the walls add plenty of light. One of the most impressive and unique rooms is the dining room of one of the properties, says Top Ten Real Estate Deals. It is large enough to fit a 10-seat circular dining table, so it is a fantastic entertaining space. While most of the walls are painted in a bright blue, the feature wall is the most impressive aspect of this room. It is painted with a fun mural with bright yellow as the predominant color and featuring colorful characters and designs.

The gallery-style kitchens combine vintage features that are in-keeping with the Art Deco style of the apartment buildings. However, they also have a modern design and trendy appliances that people expect to find in their kitchens these days. Both the kitchen units and the appliances are stainless steel, and the walls feature black brick tiles. In these apartments, the bathrooms also combine modernity with a vintage theme. The masculine feel is also evident in the bathroom with the choice of dark tiling and dark wood sink units. Printed wallpaper adds a fun element to the bathroom in one of the properties. The bedrooms vary from one property to the next. Some are on n open mezzanine level, while others are in private rooms. A feature that is shared by the bedrooms in the various properties is the use of bold colors. The use of soft furnishings that offer pops of color against the dark walls and flooring make the rooms appear fun and modern.

Who Should Buy These Penthouses?

Buying the collection will suit a developer or a real estate investor. However, as it is possible to split the sale and buy a single property, they may also appeal to wealthy individuals who want to live in Los Angeles.