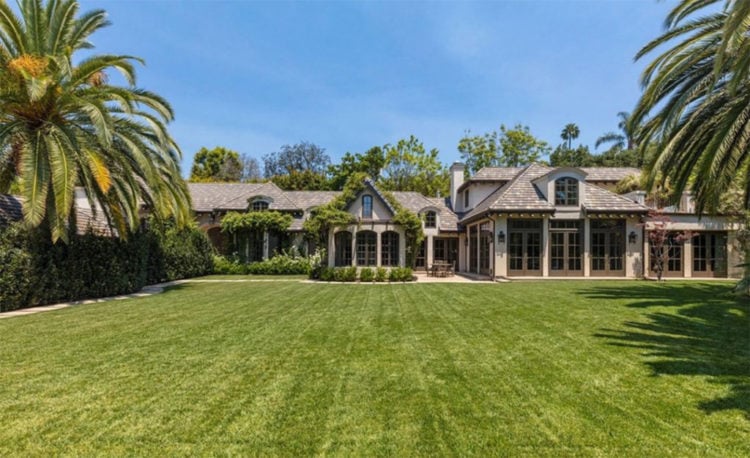 The estate previously owned by Madonna is in the prestigious Sunset Boulevard area in Beverly Hills. She purchased it from Sela Ward in 2003 for $12 million. According to Forbes, “the mansion was an entertainment nirvana where Madonna could open her heart, express herself, take a bow, holiday, and “celebrate” with plenty of room to spare.” 2013 was a busy year for Madonna with an emotional pitfall. She headlined the Super Bowl, had her MDNA Tour, and divorced her husband, Guy Richie. Afterward, she needed a change, so she sold the house to Russell Weiner, founder of Rockstar Energy Drinks, and conservative radio host Michael Savage’s son. Even though she sold her house for $9 million less than the asking price, it was a smart move because, despite its history, and the remodeling work Weiner did, it sat on the market for over eight years. During this time, it listed as low as $28.5 million and as high as $49 million. Even in all those different price ranges, there were no takers, and the house remained empty. Weiner bought the house as an investment in 2015. The 1.14 acre, nine-bedroom estate, sold for $19 million. After a remodel, he listed it at $49 million. However, less than a year later, he listed it at $35 million. The asking price may seem outrageous, but the house is true California style and a pop legend’s former residence. The French-style mansion, built in 1912, has nine bedrooms and eleven baths spanning almost 13,000 square feet. Additionally, there are two guest houses on the property. When Weiner purchased it, he made many changes to the house with only a few original things remaining, including the original icebox doors, which now house a modern refrigerator. Some of the newest features include an update on the wood ceiling now painted gray. Additionally, he added a marble-capped waterfall island as well as a herringbone backsplash. Some other features in the house include indoor-outdoor dining and a screening room with movie theatre seating. Everything on the exterior got a serious makeover as well, including the pool, guest cottages, tennis court, and landscaping, including the new natural privacy walls. Before selling the house, Weiner used it as a short-term rental for celebrities like Beyonce and Jay-Z. It’s no wonder the rich and famous would want to stay there. After all, it has a home theatre, a professional bar, a fitness gym, and a home theatre. Many other features make the house so unique. The house is exceptionally secure, sitting behind wrought iron security gates. The front of the house is a perfectly manicured lawn with palm trees flanking each side. On some portions of the house, there is moss growing. Even though the house is modern, it still maintains some of its early twentieth-century charms. The living room has an antique chandelier as well as a brick fireplace that looks like its original. Additionally, one of the mirrors in the room is a rounded window pain which helps to reflect more light into the already warm room, creating an inviting living space. On one side of the area is an arched walkway that goes into another section of the house. The house has several rooms with similar functionality. One of them is the second living room, which also has a built-in bar. Where the bar has an ultra-modern feel, the exposed beams in the house counterbalance it. At one end of the room is three windows that breathe light into a space that may otherwise seem flat. Whereas most of the house has traditional and modern elements, the kitchen is almost exclusively modern aside from the exposed grey beams, which stay true to the French farmhouse style. The kitchen is a large chrome range stove with spider burners that borders on industrial, suited for a professional chef. The bar in the middle of the room is a long granite counter that comfortably seats seven. The kitchen opens onto one of the dining rooms, which is light and airy, perfect for entertaining. One of the most striking features in the dining room is the vaulted ceilings. Not only is there a long formal dining room table but also a rustic breakfast nook. The chandelier that hangs over the main dinner table is shabby chic. The far corner of the room is a collection of three windows with a fourth at the top of the peak and French doors leading into the garden.

The bathrooms in the house are another aspect that eschews the home’s traditional aesthetic, one in white marble with a distressed tile floor. Along one side is a long, plain mirror that reflects onto a glass shower. At the far end of the bathroom is a garden tub also done in white marble. The entire room feels not only minimal but also sparse. Although many people may like the simplicity, pops of color would be good for buying the house. The backyard is an eclectic mix of modern and traditional. With so many rooms, it’s easy to combine old-world charm with ultra-modern conveniences. Aside from some lush spots for respite, there is also a pool and a tennis court. Throughout the backyard, there are palm trees that provide shade from the hot California sun. Madonna once said, “I like to change. A new lamp, a piece of art, can transform a room.” When she sold the property, she knew that she needed a change redecorating couldn’t fix. Additionally, it seems like a stroke of luck that she sold the house before it sat on the market for several years. Russell Weiner did more than changing the lighting or dress it up with artwork. Instead, he reimagined and updated the classic property. His foresight paid off since, after so many years, his investment has paid off and almost doubled.