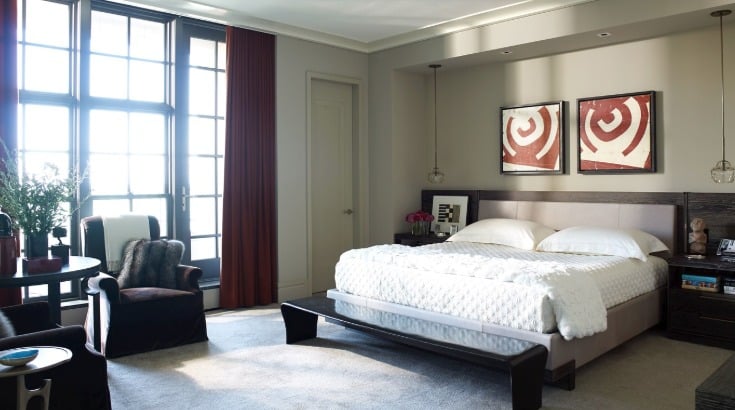 Considering Holly Hunt is a designer who founded Holly Hunt Design, it is hardly surprising that her home is something to admire. This businesswoman is the CEO of her company, which specializes in home furnishings, lighting, textiles, leathers, and rugs. Unsurprisingly, she has chosen to feature many items from her own collections in her luxurious home on Chicago’s Gold Coast. When she first moved into the co-op, she completely gutted it as she wanted to put her own stamp on the property. It has taken her several years to completely renovate the 4,600-square-foot space and to a certain extent, it is still a work in progress as she continues to update her home with new pieces.

Such mini-makeovers are easy for this designer as creating beautiful spaces is something that comes naturally to her and is what has led to her having such a successful business that now boasts ten showrooms. The property features high ceilings and large windows, which gives each of the rooms a sense of natural light and space. She has repainted all the walls in the property, predominantly in white, and this is a perfect contrast to the dark wooden floor that is featured throughout her home.

In the sitting room, the sofas are a dominant feature. One of the sofas is located under the large bay window and this is a custom-made Vladimir Kagan sectional sofa. Hunt chose to have this raised to reduce the amount of light that was flooding through her window. The rug is another striking feature of this room as this covers a large area of the floor and is a modern design in cream and brown. She has added accessories to this room from her collections, including floor lamps and sculptures. The feature wall displays a huge canvas by Helen Frankenthaler.

Hunt’s love of artwork is evident in many areas of her home as there are paintings in various styles by different artists on display throughout her home. For example, she has a huge, brightly-colored painting by Robert Rauschenberg on display in the hallway of her co-op. The dining area has a simplistic but sophisticated fell with a large black and white Robert Motherwell artwork and an unusual light fixture by Frederik Molenschot from Carpenters Workshop Gallery suspended over the six-seater dining table.

Holly Hunt’s kitchen is modern and bright with white cupboards and granite work surfaces. The stunning floor is leathered French limestone. The kitchen is also fitted with Holly Hunt Studio pendant lamps. The bathroom in this property is equally stylish and has a contemporary design. The floor is polished travertine and the room is fitted with a stylish vanity unit that features his and hers sinks. This room features a spacious double shower unit.

Hunt’s master bedroom has a rustic feel with simple furnishings and white bedding. The focal point of the room is the pair of Capio Fonesca artworks which are hung above her bed. The guest room has a similar feel in terms of its design and this features a pair of Robert Kelly mixed media pieces alongside a Donald Sultan charcoal work.