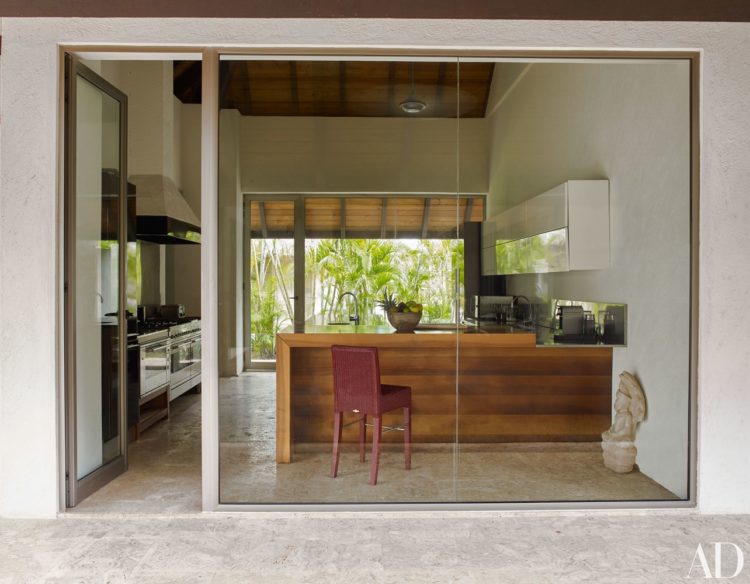 To be honest, the kitchen isn’t nearly as spectacular as you would expect for one in a multi-million dollar home. With that being said, it is adequate, though certainly small. Although it is not open to other rooms of the house (a short hallway connects it to the living room and dining room), the floor-to-ceiling windows and glass doors on each side do open directly outside. On the left, state-of-the-art appliances, including a huge range, provide an opportunity to cook. There are two sinks in the kitchen, which is great, but there is very little counter or cabinet space and a refrigerator isn’t visible. It makes you wonder if this is really the main kitchen like the AD article reports it is. The master bedroom is just as elegant as every other part of the house, though it does have a bit more personality, thanks to the addition of the large painting by Fernando Varela that hangs above the bed on a coral-stone wall, along with the shelving beside the bed and a few plants. The king-size bed is by Roche Bobois, while the bedside tables are by DM Dominicana. Wooden shutters cover the floor-to-ceiling windows, allowing Marc to block out the sun until he is ready to get up. As an added bonus, the ceiling fan hanging from the vaulted ceiling with wood beams makes certain he stays cool.