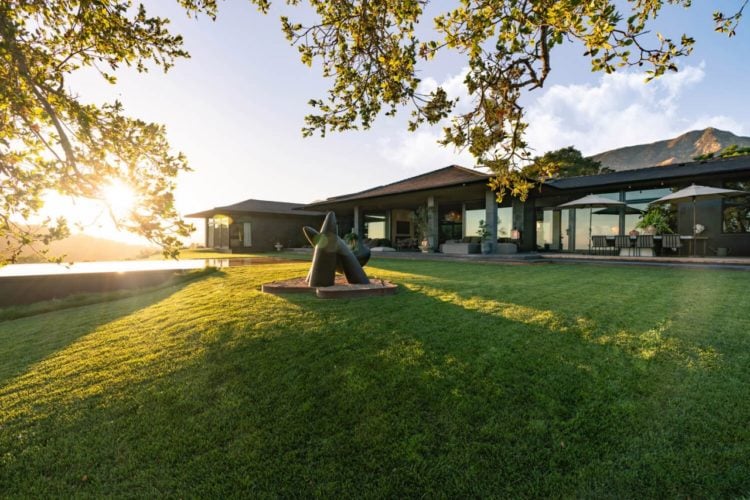 Ellen DeGeneres is a comedian, television host, writer, producer, and actress. She is best known for hosting her syndicated television talk show ‘The Ellen DeGeneres Show,’ for which she is also the creator, a writer, and a producer. The show has aired since 2003. DeGeneres has won multiple awards for her work, including 30 Emmys and 20 People’s Choice Awards. DeGeneres is one of the best-paid and most successful women on television in America, and it was reported that her earnings for 2018 were $87.5 million. According to Business Insider, her net worth is $330 million. However, some estimates suggest Ellen DeGeneres’ net worth is closer to $490 million. In her personal life, DeGeneres has been in a relationship with actress Portia de Rossi since 2004, and the couple married in 2008. They live with their four dogs and three cats in California. The couple has several properties in California, including an estate in Montecito, a modest condo in the same area, and a luxurious mansion in Beverley Hills that they bought from Adam Levine for $42.5 million in 2019. It is the estate in Montecito that the couple has recently sold for a whopping $33.3 million. Let’s take a closer look at the former home of Ellen DeGeneres and Portia de Rossi in Montecito, California. Ellen DeGeneres and Portia de Rossi bought the compound in Montecito in 2018 for $27 million, then spent a further $1.9 million on a small adjacent property. DeGeneres and De Rossi completely refurbished the property, which included adding a state-of-the-art security system and decorating throughout. They initially listed the house, which was built in 2011, for $40 million but sold it less than a month later for $33.3 million. The price included the smaller adjacent property. Although the identity of the buyer has not been disclosed, it is known that the buyer is from Los Angeles, and they paid in cash for the property. The Bali-inspired mansion sits at the eastern end of Montecito, California. It is in the Salt Hill estate in the San Ysidro foothills, and it overlooks Carpinteria. The extensive 10,700-square-foot property boasts four bedrooms and seven bathrooms. It sits on a large 9.3-acre plot, and both the house and the grounds boast stunning views of the ocean and mountains. The impressive standard of the house is obvious as soon as you reach the front door. You are met by an entranceway made entirely from glass that offers sightlines through the property to the ocean beyond, says Dirt.com. A great room is the main living space in the Bali-inspired, single-story property. It is divided into different living and dining spaces in an open-plan manner. One of the most interesting features of the main living space is the exotic wood trim, which also features in other areas of the residence. The great room has floor-to-ceiling windows and sliding doors that lead out onto the grounds and offers spectacular ocean views. In addition to the seating areas in the great room, there is also a separate family room. It has white walls and a vaulted wood-paneled ceiling. From the family room, there are double doors leading out into the garden. The exotic wood is just one of the high-end materials used throughout the property, as there are also luxurious touches in the state-of-the-art kitchen. It has honey-colored wood cabinetry, and black marble work surfaces, and high-end stainless-steel appliances. There is a large island to the center of the kitchen that also boasts honey-colored bottom cabinets wrapped in black marble. Stools at the island offer an informal dining space. Like the great room, the kitchen also has floor-to-ceiling windows and sliding glass doors so the homeowner can look across the grounds to the ocean while preparing a meal. An interesting room in this house is the large library, which is lined on two walls with floor-to-ceiling bookcases. At the far end of the room, there are windows to the small windows to the wall’s upper section to allow light into this tranquil room. There is also a separate office that is filled with antique furniture. The Montecito property boasts four bedrooms, all of which have an ensuite bathroom. There are a further three bathrooms around the house. The master suite is the most impressive of the four bedrooms, and it features a built-in soaking tub that sits by a large window to overlook the grounds and the rolling hills beyond. While the inside of the property is amazing, the outside is what makes it stand out from other mansions in the area. The plot is 9.3 acres and overlooks Carpinteria and the ocean while sitting against a backdrop of hills. Therefore, there are picturesque views of the surrounding area, no matter where you are on the grounds. The rolling grounds surrounding the property include manicured lawns, mature trees, and tropical plants. There is also a large koi pond, a tennis court, modern art sculptures, and multiple spaces for alfresco dining and entertaining. One of the patios boasts a firepit where the homeowner can sit and relax on a cool evening. However, the highlight of the grounds is the humungous infinity swimming pool. It is positioned to jut dramatically out of the ground so that it overlooks the ocean. The pool is a fantastic place to appreciate the stunning surroundings and amazing Californian climate. The grounds also contain several additional buildings. These include a 1,400-square-foot guesthouse and a separate 720-square-foot cabana, which DeGeneres and De Rossi use as a gym. Also, there is a 400-square-foot guard shack that can accommodate full-time security staff. Following a burglary at the property, extra DeGeneres added additional security features, including infrared lasers and multiple cameras around the grounds.