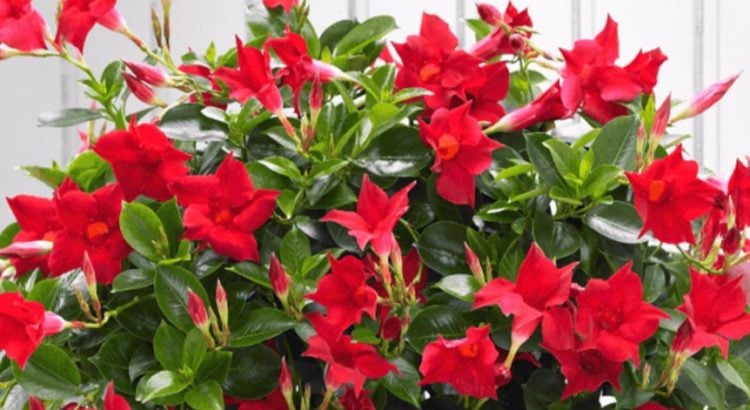 Dipladenia is a member of the Mandevilla family. As a result, it should come as no surprise to learn that the two can look very similar to one another. Unfortunately, this is the reason that a lot of interested individuals have confused dipladenia for mandevilla and vice versa, though on the plus side, this has an interesting benefit in that the two plants can be cared for in much the same manner.

As for why anyone would want to grow dipladenias, well, suffice to say that the species is a vining plant that can be planted in a wide range of locations such as containers, mixed containers, and hanging baskets. Moreover, they are hardy plants that don’t need much effort to grow, meaning that they are a great option for people who want something ornamental without having to pour too much of their limited time and effort into the process. Of course, it should come as no surprise to learn that dipladenias possess beautiful red, white, and pink flowers that can be expected to remain all season long.

Here are some important information to keep in mind when growing as well as caring for a dipladenia:

The dipladenia is a tropical plant. As a result, it is best-suited for hardiness zones 9 and 10 on the USDA scale. However, it isn’t impossible to grow dipladenia in more northern climates so long as interested individuals are prepared to bring them indoors for the winter. In this, the dipladenia is a much more convenient option than the mandevilla because it tends to take on a much more bush-like appearance whereas its counterpart can vine for more than 20 feet.

Do Their Best In Full Sun

Generally speaking, the dipladenia will do its best when it gets six to eight hours of full sun on a daily basis. However, it is possible for the species to tolerate partial shade, though it might have a harder time thriving under said conditions. This is one more reason why interested individuals might want to grow their dipladenias in something movable instead of putting them in a more permanent location. By making sure that their dipladenias can be moved, they can adjust the amount of sun that their plants get with relative ease, which can be very important in climates where the local sunshine might be too strong and too long-lasting for the species to thrive.

Damp But Not Wet

One of the similarities that dipladenias share with mandevillas is their ability to continue flowering in spite of some dryness in their growing conditions. With that said, they do better when their soil is damp but not wet on a constant basis, which should make it clear that they do need a fair amount of moisture to thrive. For those who are curious about watering instructions, the recommendation is to water in a slow manner so that the soil can soak up the moisture while making sure to spray the leaves to some extent.

Don’t Get an Oversized Container

Choosing the right container can be critical for ensuring the best-looking flowers. This is because a dipladenia in an over-sized container will use more of its energy in growing its roots rather than its flowers, with the result that interested individuals can expect smaller flowers that will take longer to come in. Even when a dipladenia has become root-bound, the best solution is to get a wider container that isn’t actually much deeper than the old one.

Fertilize On a Regular Basis

In colder climates, interested individuals must make sure to bring their dipladenias indoors to prevent them from being exposure to temperatures of 50 F or lower. Generally speaking, dipladenias will slow down to some extent while overwintering, which is why there is no need for fertilizing during this period. However, they still need plenty of sunlight as well as enough water to keep them from drying out to the point of dying.