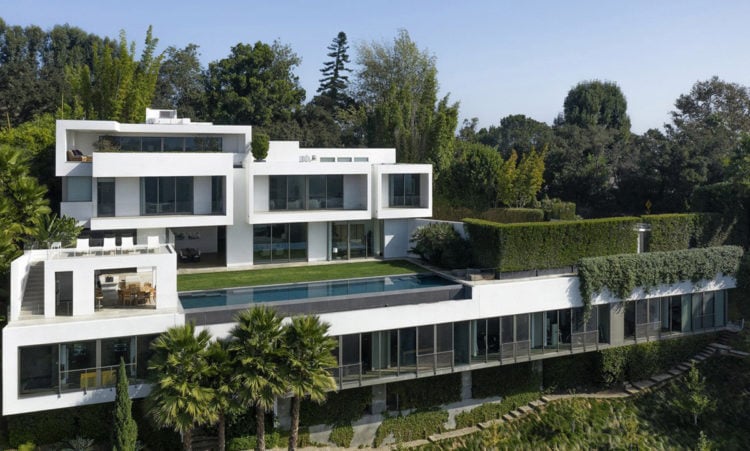 Comedian Trevor Noah just shelled out $27.1 million for one of the most revered and sought after residences in Los Angeles: 833 Stradella. This masterpiece of contemporary design was skillfully represented by Linda May and Drew Fenton of the real estate agency Hilton and Hyland in L.A. By taking a look at the site, one can get a glimpse of just how majestic, balanced and unique this residence is. This 11,000 square feet, 3 stories high, mansion nestled in the hills of Bel Air successfully integrates a geometric, contemporary design with Japanese inspired architecture and landscaping.

It wasn’t long after selling his first Bel Air mansion worth a cool $21.7 million, did Trevor seal the paperwork on another top-of-the line property located in the same neighborhood. In fact, both homes are set approximately within a mile or so of one another. The deal was settled on December 30, 2020, pretty nice way to welcome in 2021 by anyone’s standards. Let’s take a closer look at this lavish residence, to see just what it is that makes it such an exclusive and rare find. Designed and Built on the Foundation of Japanese Aesthetics

The architect who designed Trevor’s new residence is Mark Rios. According to Rios, he was heavily influenced by Japanese architecture. Rios took his time in designing this monument to skill, design and craftsmanship, stating “I went through over 50 plans before we settled on one”, admitting that architects are their own worst critics. To give you a basic idea of how the Japanese aesthetic influenced the overall design, know that Rios based the library on a room he viewed in Kyoto, Japan, stating “the library, in particular was fashioned after a room in Kyoto, using heavy, dark timbers”. Rios incorporated this idea of using thick walls and doors as a way to create a quiet environment for each room. Rios,who helped found the architectural firm, Rios Clementi Hale Studios, built this iconic home out of necessity. As the home he and husband, Dr. Guy Ringler had shared for 15 years was beginning to sink, he had to come up with something fast, and that meant designing and building a home from scratch. The location chosen for the site of the home offers much in the way of privacy, being surrounded by lush green vegetation and expert landscaping. It should be noted that Rios is not only a Harvard educated architect, but he also secured a degree in landscaping. As such, he was more than able to create a lavish, yet serene sanctuary for himself and his husband.

Sleek, Stylish Lines of the Exterior Guide the Observers Eyes

Upon approaching the property, one immediately notices the well ordered, balanced and minimalist geometric structure of the home. Here, the rectangular, box-like rooms positioned in such a way as to interact with one another. By reading that description, one would think that the design would be harsh. On the contrary, each room is placed such a way as to flow, one into the other. Thus merging with the contours of the hillside to which it’s bonded. Indeed, one might say that this home is one with nature, emerging from the hillside, rather than being simply placed there for the sake of convenience. The backside of the mansion tells a different story, as its designed to meld with nature, not fight against it. This, in and of itself shows the true genius of Rios. As for the overall design, Rios kept it simple with the idea of allowing both the exterior and interior of the home speak for itself. In fact, if you examine the photos, you’ll find that the home is void of anything which screams, “look at me!”, and that is where the master craftsman has proven his command over design.

Lavish But Meant to be Lived In

With 11,000 square feet of space, there’s plenty of room for one to sit back, relax and enjoy the pleasures of a smooth, creamy latte. As stated, the location of this contemporary masterpiece provides more privacy than than Trevor’s previous home. The glass pocket doors shoot up from floor to ceiling, integrating the organic contour of nature into the refined lines of the home’s sleek and steady build. Indeed, the surrounding landscape carries with it, a distinct Japanese flavor, blending quite nicely with the view of the waters of the Pacific Ocean and bright lights of L.A. While the home may come across as nothing but an egocentric showplace, nothing could be farther from the truth. In fact, it’s designed to be lived in–to be enjoyed. For instance, those who adore the crisp and sharp scent of citrus, would find the Lemon Terrace most inviting. Here, guests can unwind in the aura of a grove of carefully maintained citrus trees. When it’s time to relax, there’s the spa room, which was inspired by Rios viewing the old ryokans in Japan. Guests can soak up the good life in an exquisite wooden tub. As the tub is positioned near the windows, anyone enjoying the spa can also take in the serene beauty of the Santa Monica mountains.

As for entertaining friends, family and clients, Rios designed an area on the roof for just that purpose. There, people can enjoy watching the latest film in its screening room, or take in the view from the large terrace. Visitors will definitely enjoy escaping from the hot California sun by stealing a dip in the expansive, 15 x 60 foot infinity pool. When the swimmers have cooled off for the day, they are welcomed by a complete outdoor eatery. This includes an open firepit, fully functional bar, dining table and chairs. Up above, guests are treated to an enclosed, glass sun deck, where views of the city and ocean remain unobstructed. We can conclude that this masterful and captivating architectural marvel will serve the needs of Trevor quite well, with it’s eight bathrooms, six bedrooms, three powder rooms, gym and more. Designed to be lived in and enjoyed, this mansion welcomes both adventure and serene living. No matter what your mood, you can and will find a space to serve that mood, and serve it well. The lighting for each room has been carefully implemented to showcase the ambiance and atmosphere of its character, allowing the individual to immerse themselves in the environment, to either charge up their batteries, or enter a state of complete and utter relaxation. This is indeed, a home with a purpose.