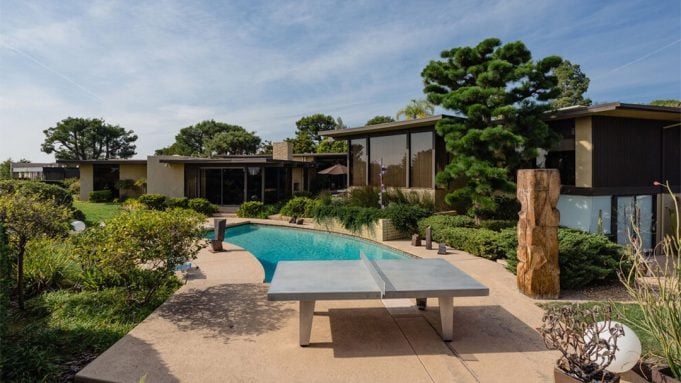 Have you ever wished that you could go back to a time when things seemed less complicated, perhaps the time during your childhood when you are blissfully unaware of all the problems of the world? If that just happens to be a time during the 1970s, you might be interested to know there is a house in the Trousdale Estates of Beverly Hills that essentially serves as a time capsule to a bygone era, one that many individuals would like to go back to at least in part. It’s true, this house is just over 5,000 square feet (5,409 to be exact) and it sports four bedrooms and four bathrooms. Built in 1971, it just sold for almost $12 million. That may not sound terribly extravagant, especially when you consider the fact that it sits in the Trousdale Estates of Beverly Hills, a place where homes are expected to go for this much or even far more. The thing that truly makes this house unique is that it was indeed built in 1971 and it hasn’t really undergone any apparent changes since that time. When you walk into the house, you genuinely feel like you’re in a completely different era, almost as if you have stepped out of a time capsule yourself. As long as you’re inside the home or on the grounds, it’s rather easy to fool yourself into believing that it is the 1970s all over again. There are plenty of reasons why this house evokes that particular era, not the least of which involves its enormous Ranch construction that allows you to stand at one end of the house and see all the way to the hall at the opposite end of the home. As a matter of fact, a lot of attention to detail has been paid here in order to create a house that still feels very much like it was just built, almost as if it were 1971 all over again. So, what is it about this house that makes you feel like you’ve walked back into the 1970s when you go through the front door? For starters, the entire house has wall-to-wall carpet, something that was exceedingly popular during that particular era. It’s also a quality that has definitely become less popular over the years, meaning that it’s become more and more difficult to find houses to have this feature. If you just so happen to be someone who fancies this type of thing, you’ll practically have to design and build your own home or do a complete makeover of the house you’re currently living in in order to enjoy wall-to-wall carpeting. Here, that is not an issue. Of course, there are other details as well. Sunken living rooms were a very big thing during the 1970s and this house definitely leans into that particular vibe. It even couples that sunken living room with a black stone fireplace, another favorite of the 1970s era that can hardly be found anywhere today. Last but not least, you’ve got the period furniture, a Roman soaking tub located in the main bathroom and a dressing room complete with green textured wallpaper designed to look like giant leaves. It doesn’t get much more 1970s than that. A House Well Cared For

Of course, there’s no way that you can build a home in 1971 without updating it over the years. This house has definitely been updated (many times), but great care was always taken to update it in such a way that it retained its original appearance. You can bet that the electricity and plumbing have been updated to fit modern building standards, but as far as the appearance of the home is concerned, it looks like the home is still brand new and it’s the early 1970s, almost as if it has been untouched by the hand of time. In order to pull that off, the owners had to carefully upgrade and update the home over the years, always making sure that they upgraded it in such a way that it wasn’t overly obvious that anything had been done. They wanted to maintain its early 1970s appeal. In order to do that, they’ve had to go to great lengths in order to maintain both the exterior and interior of the home, along with all of the home’s decor. They’ve done an excellent job with it, as it’s in such condition that it does indeed still look brand new. All things considered, it’s no wonder that it sold for almost $12 million. All It Takes Is One Person

Granted, a home that still incorporates all of the 1970s decor that was so popular during that decade isn’t for everyone. Like most other things, some people absolutely love it and others can’t stand it. A lot of people want to get away from anything that could potentially date their home, preferring instead to keep everything up-to-date with the latest design trends. Other people would far prefer to find a home that incorporates the type of decor from their favorite era and then just live in it. That’s what this home provides. In part, it’s appealing because it’s an attractive home in its own right but the other part involves allowing anyone who walks through the doors to forget about the outside world, if only for a few moments. For just a second, it’s almost like genuinely going back to a different time and if that favorite time of yours just so happens to be the 1970’s, it’s easy to see why a home like this would be so appealing to live in. At the moment, it looks like the new owners plan to keep everything almost exactly as it is. Aside from the rather hideous chair in the entryway that almost looks like a cactus with feet and hands, there don’t seem to be any grand plans to change a lot of things. That can definitely be a good thing, as it would be a shame to see a house like this suddenly vanish in order to become yet another rendition of a modern home. This particular house doesn’t just have appeal, it has character. Hopefully, it’s new owners will continue to honor that character as they move forward.