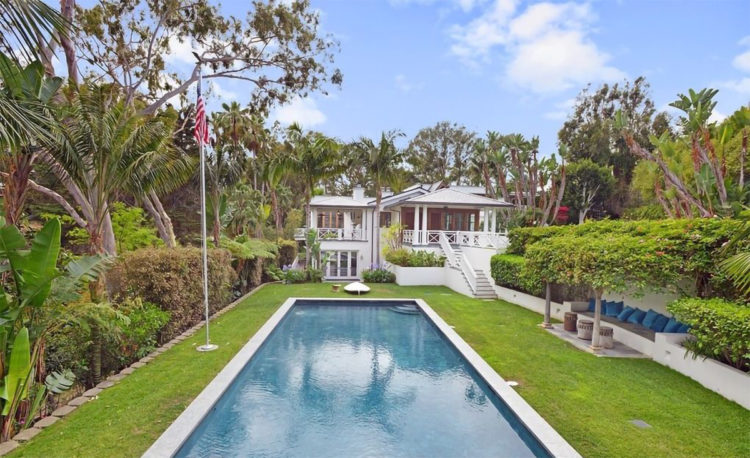 Thomas Wesley Pentz, better known by his professional name Diplo, is a DJ, songwriter, and record producer. Although he is originally from Mississippi, he is based in Los Angeles, California. He began his career in 1997 and has since become increasingly successful. He has collaborated with multiple other artists throughout his career. His collaborations have included forming the electronic dancehall project ‘Major Lazer,’ of which he is the lead member. The other members of the project are Labrinth and Sia. Due to the success in his career, Diplo’s net worth is $26 million, says Celebrity Net Worth. The wealth he has accrued means that Diplo can take his pick of luxurious homes, including a Hollywood Hills property that he bought for $2.4 million in 2016. Now, he has paid $13.2 million on a stunning Malibu property.

An Overview of Diplo’s Malibu Mansion 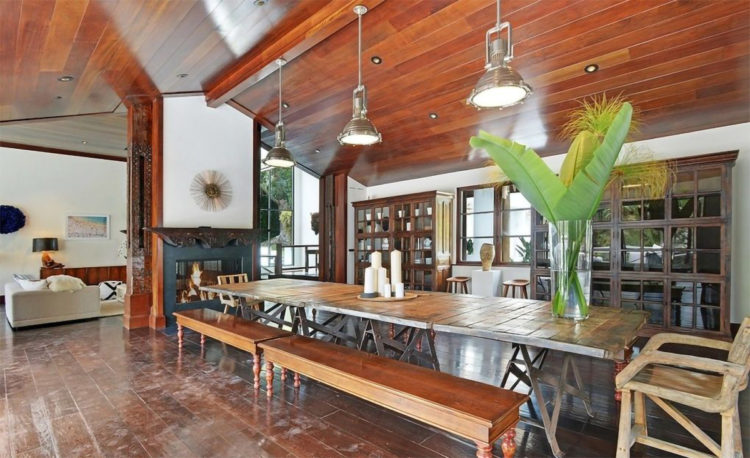 Diplo’s new home is located in Malibu’s Point Dume area, which is a popular neighborhood for celebrities. The DJ is not the first celebrity to live in the Bali-inspired Malibu mansion, as it has long been one of the most desirable areas for the rich and famous. The property was once home to the singer, songwriter, musician, and rapper Kid Rock, who bought it in 2006 for $11.6 million. He purchased the villa as a vacation home rather than as his main residence. Kid Rock then put the property back on the market in2013, with a price tag of $13.5 million. Unfortunately, there was a lack of interest in the property, and it did not sell for its initial asking price. Over the four years that the house was on the market, the price was dropped repeatedly. Eventually, it sold in 2017 for $9.5 million, and the buyer was Ryan Somers, a Beverley Hills-based businessman. The sale price meant that Kid Rock made a large loss on the property. Unlike Kid Rock, Somers managed to make a profit on the house when he sold it to Diplo for $13.2 million. The property measures 8,305 square feet and boasts seven bedrooms and 5.5 bathrooms. It sits on a 1.5-acre plot that transports you to the tropics. So, let’s take a closer look at this fantastic Malibu property.

Inside the Stunning Malibu Home 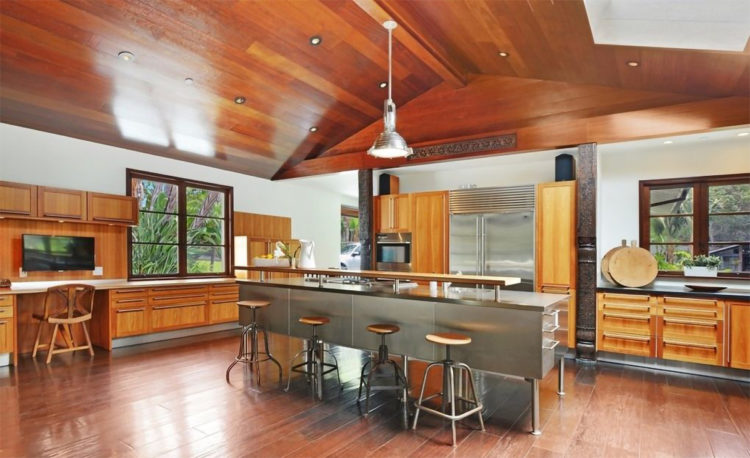 Diplo’s spacious new home measures 8,305-square feet. It. It is significantly larger than his current 2,500-square-feet Hollywood Hills home. There are many features that run throughout the property, including white walls, hardwood floors, polished wood ceilings, Polynesian features, and recessed lighting. A massive great room in the house is divided into different zones for living and dining, says Dirt.com. There are two separate seating areas positioned side-by-side. One of the seating areas is set around a freestanding, double-sided fireplace. The fireplace features a carved wooden mantle, and it is surrounded by gray siding. The other seating area connects the indoors and outdoors. There are floor-to-ceiling windows that overlook the lush gardens and the pool and French doors that lead to a patio area with an in-built BBQ grill. The patio is partially covered, so there is the option to in the shade or to enjoy the warm weather. 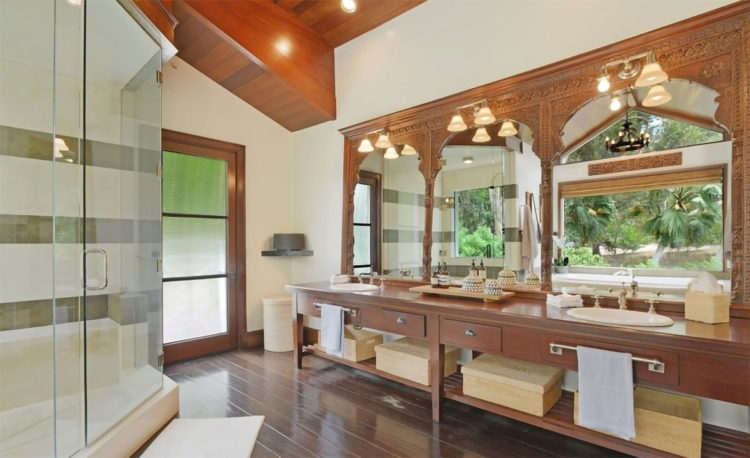 The dining room section leads through to the kitchen. A vaulted wood ceiling is one of the main features of the room, and there are large double doors leading out to the gardens. The dining room has enough space for a long table and wight stools, and there is the potential to seat even more guests in the vast area surrounding the table. Adjoining the dining room is the kitchen, which has honey-colored cabinetry running along one wall. The kitchen boasts high-end appliances, a large window, and a door leading outside. To the center of the kitchen is a large island, which serves three purposes. It offers both additional storage and extra workspace. It also acts as an informal dining area, as there are stools running along one side. Although there are seven bedrooms in the property, the most impressive of these is the master suite. In addition to the main bedroom, there is also a separate seating area. From the bedroom, there is a large master ensuite with a soaking tub next to a picture window. There are also two large walk-in closets. The master suite also benefits from double doors leading out to a private patio that overlooks the backyard. To reach the lower level of the house, there is a wooden staircase. The lower level houses a family room with a fireplace and an exercise room. 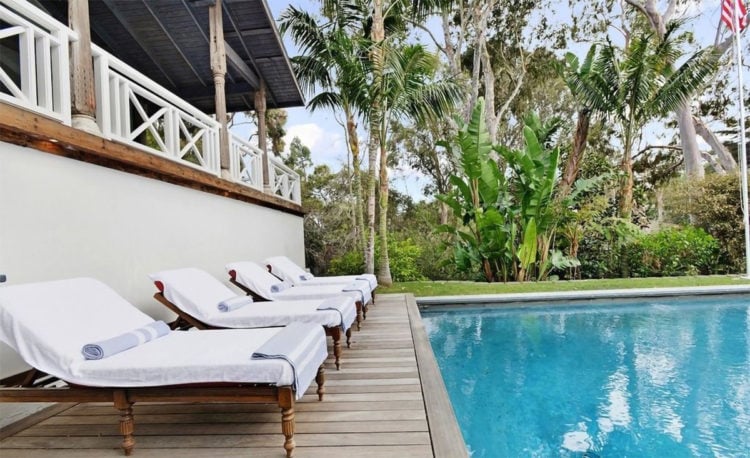 Diplo’s new home sits on a 1.5-acre plot of lush gardens with a tropical vibe. Shrubs and mature palm trees surround the property. These add to the tropical feel of the grounds and give the homeowner some privacy while they relax in their back garden. The private backyard is the perfect area for entertaining guests, alfresco dining, or relaxing in the California sunshine. One of the main features of the grounds is an outdoor swimming pool, which is surrounded by manicured lawns and has a decked area with sun loungers. There is also an outdoor shower to use before and after taking a dip in the pool. Diplo and his friends and family can also enjoy dining in the sunshine, as there is a large alfresco dining area. The vines covering the dining area offer some shade, and diners can sit comfortably on the custom-built seating. Although the garden does not offer ocean views, that is not an issue for the new homeowner. Included in the $13.2 million sale price is a key to Little Dume, which is a private stretch of beach that is one of the most scenic in Malibu. Therefore, Diplo does not have far to go to enjoy the property’s seaside location and stunning surroundings.

How Do You Polish Plastic?

What Kind of Paint Should You Use on Rubber?

What is a Palm Frond and What Should You Do With It?