Home
Interior Design
What is the “Wallpaper Girl” Style?
Prev Article Next Article 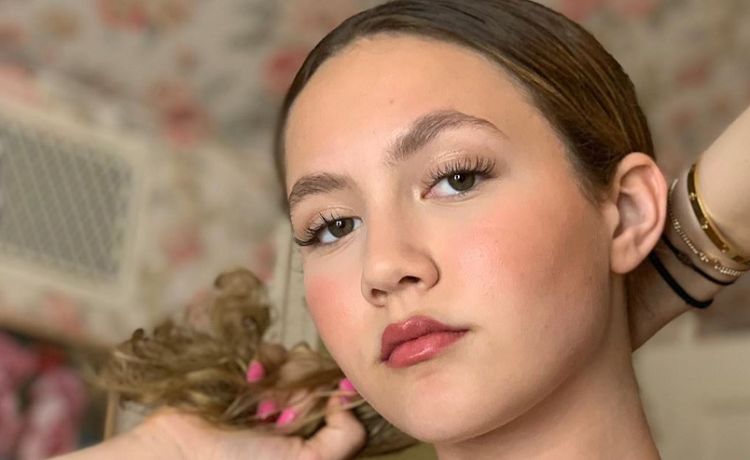 As reported by House Beautiful, something’s afoot in the world of the selfie, and for once, it’s got nothing to do with the size of Kylie Jenner’s pout. If you’ve been trawling through the pages of Instagram lately, you’ll have noticed something different… something that, at first glance, is hard to put your finger on. But once you do, it becomes impossible to miss. We are, of course, talking about the all-new selfie backdrop. Whereas once the Instagram Queens wouldn’t be seen dead posing in front of anything other than the starkly modern and the die-hard chic, these days, things are looking a little sweeter, a little chintzier, and dare we say it, a little more old fashioned.

The reason, as with so many things at the moment, is the lockdown. With so many millennials and generation z’ers abandoning their city apartments to spend quarantine hunkering down with their parents, the option to take a snap against a plain white wall and some iconic piece of art has gone. Instead, the young and the fashionable are having to make do with their childhood bedrooms, and the aesthetic couldn’t be more different if it tried.

Sure, the outfits are as funky as ever, but now, you’re as likely to see a toile printed wall as you are an all-white expanse. So ubiquitous has the new look become, it’s even been branded with its very own name. Coined by Tik Tok star Charlotte Samuels, “the Wallpaper Girl” style describes the peculiar juxtaposition of funky girl-about-town with interiors that look like they’ve been taking straight from the pages of Little Lord Fauntleroy.

Talking about the all-new Instagram look (and throwing a little light onto the meaning of ‘wallpaper girls’ at the same time) Samuels says (https://www.apartmenttherapy.com/wallpaper-girl-tiktok-trend-36750608), “Wallpaper Girls live in Los Angeles or New York. When they were growing up, they probably had a bedroom with super expensive wallpaper. Decorating their rooms, the moms wanted it to be elegant, timeless. They paid a lot of money for that wallpaper and those matching valences. And they probably expected (their daughters) to grow up to be like (Gossip Girl’s) Serena and Blair. But they grew up to be baddies. “And that aesthetic [the childhood bedroom] doesn’t match this one [the fashionable new city look]” she added. “So those girls are grown up. They’re cool. They have to take their selfies somewhere, so why not take them in their rooms. And so, the wallpaper girl is born. She’s cool, but she’s still got the OG wallpaper.”

Ah… the wallpaper! The valances! Whether they’re toile or chintz, the one thing they all scream is old money. And that’s where the juxtaposition comes into play. With her on vogue outfits and uber-modern fashions, the Wallpaper Girl is everything old money isn’t… she’s rebellious, she’s angsty, she’s got more grit than a sandbox. But weirdly, she still fits in against the old-school wallpaper and baroque fireplaces… proof, perhaps, that you can take the girl out of the Upper East Side, but you can’t take the Upper East Side out of the girl.

According to the interior designer Patrick McGrath, the new look we’re seeing is all about mixing things up, about blending the old school with the modern to create an all-new, super contemporary aesthetic. “That’s what Wallpaper Girl is picking up on: Cool girls who’s chic moms decorated their bedrooms,” he tells House Beautiful. “Just because your home is conventional doesn’t mean that you can’t wear a Celine biker jacket or The Row dress. That juxtaposition is what makes it so interesting… classically cool.” If you’re wondering exactly what this mysterious ‘classically cool’ person looks like, just take a look at Judd Apatow’s eldest daughter Iris’s Instagram. That, ladies and gentlemen, is both what a ‘classically cool’ person looks like and the perfect essence of what it means to be a ‘wallpaper girl’.

For others, the trend (or observation, as some prefer to call it) is about one thing and one thing only: fun. Forced out of their funky little lofts and back into the floral-patterned bosom of the family home, trendsetters are getting creative with how they present their image to the world, and having a lot of fun in the process.

“I think this new wave is so much fun. Obviously, influencers are having to change how they shoot due to what’s happening at the moment. In my opinion, the creativity in the industry is really booming,” Lauren Eggertsen, senior fashion editor for WWW, says. “This particular trend (the wallpaper girl style) really speaks to me. I love a good juxtaposition. You’ve can see the comparison of the primly proper wallpaper scene as a backdrop for everything that’s current and trendy”.

But in all the fun and frivolity, there’s a more serious side to the trend. Outside of social media, chintzy furniture and patterned wallpaper are being used in TV and media as a backdrop to the social angst, teenage rebellion, and inner turmoil of characters in the likes of Charlotte Perkins The Yellow Wallpaper and Hulu’s Little Fire’s Everywhere. Against the old-school stylings of nostalgic net curtains and romantic designs, the gritty, angry characters and hotly topical storylines are suddenly imbued with a whole new level of social import.

Which kind of brings us full circle. The social climate is changing; lockdown is part of it but who knows what the social landscape will look like when we emerge? Finding new, creative ways of dealing with the situation is probably one of the best things we can do to keep ourselves sane and happy… and if that gives 20- somethings the license to bring 90s chintz back to the center stage, then all hail the wallpaper girl!