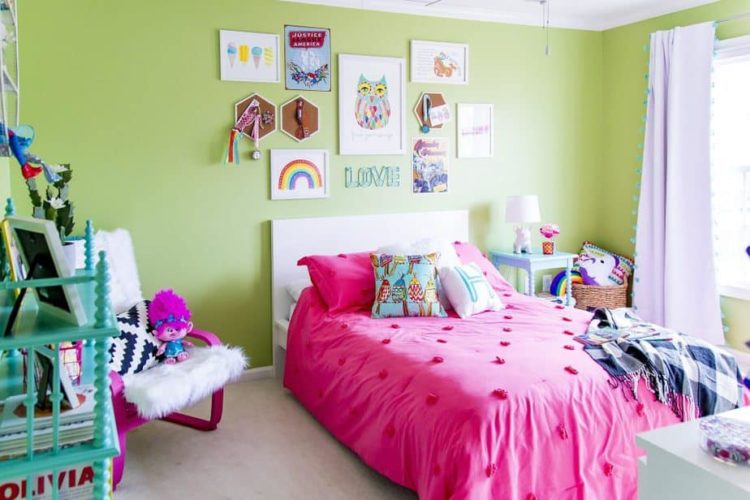 Let’s face it, 2020 has been miserable. Global pandemics, broken economies, riots, revolutions… we can’t even enjoy a simple avocado on toast without being accused of wrecking the environment. Worst of all, there’s still a couple more months of it left. And who only knows what 2021 will bring? At this point, it’s fair to say we all need a little cheering up. And what better way to do that than with a big dose of rainbow inspired color? We can’t guarantee turning your house into a riot of color will fix the world (actually, we think there’s a 100 percent chance it won’t). But we do promise it’ll make it that little bit easier to bear. If you’re ready to introduce a little sunshine into your life, check out these ten essentials for the perfect rainbow bedroom.

If you want the perfect rainbow bedroom, you need to get a bit literal about certain things. Which basically means you need to forget subtlety and get an actual rainbow. Plucking one from the sky is likely to end in disappointment. It’s also not entirely necessary. Whether you go for a rainbow bedecked light shade, a rainbow inspired incense tray, a rainbow dotted pillow case, or paint a full-scale rainbow on your wall, there’s no end of ways you can add a touch of rainbow magic to your room. Just make sure it’s a literal representation of a real-life rainbow – gradient colors have their place, but they’re no substitute for the real thing. They’re also far less likely to have a pot of gold buried beneath them.

Rainbow bedrooms aren’t about subtlety. If you prefer calm, soothing rooms that prize tranquility over personality, stop reading now. We’re aiming to create the kind of happy place that’s the interior design equivalent of a sugar rush. The kind of place an 8 eight year would be happy to call home. All that being said, don’t feel obliged to cake every surface, fabric and wall in the contents of your local paint store. A tiny bit of restraint will stop the room descending into chaos and make the colors you do end up introducing pop all the more. Get the look right with a simple, solid colored wall. It doesn’t have to be white – ohjoy.blogs.com recommends a soothing mint green, while a pale shade of primrose can look equally lovely. Just keep it solid, keep it light, and keep it bright.

According to decortips.com, vinyl decals make a fabulous addition to a rainbow bedroom. We don’t disagree. Easy to apply and available in a mammoth range of styles and designs, they’re a great way to add some rainbow magic to a bedroom (and if you end up deciding to go another route in a few years’ time, they’ll peel off just as easily as they went up). They’re also a great (and very affordable) way for kids to add their own touch to a room – simply hand over control of the decals and let them decide where, when, and how to place them.

4. A swathe of bunting

Okay, so no self-respecting adult is going to allow bunting to come within a foot of their bedroom. But if you’re decorating a child’s bedroom, it’s neigh on essential. Keep the rainbow theme by making sure each flag is a different color to its neighbor. Use the bunting to cordon of a reading nook, overhang the bed, or go all-out by swathing it across the entire ceiling. It’s cheap, it’s cheerful, and it’ll perk up a dreary corner no end.

If you’re decorating your kid’s bedroom, you can get just as extravagant with the rainbow theme as you like. If you’re decorating your own room, you might want to err a little more on the side of caution – after all, a full-blown rainbow theme is acceptable enough for a pre-teen, but your friends might raise an eyebrow if you adopt the same. If you want the color and the cheeriness of a rainbow room but can take or leave the rainbow replicas, look for a few multi-colored bed throws. They’ll add enough vivacity to be stimulating, but not so much as to be migraine – inducing.

What could be better than a rainbow pillow? A rainbow unicorn pillow, of course. After all, why limit yourself to one great visual when you could have two? Sneak a few into your kid’s bedroom and they’ll love you (and the pillows) for life.

Fancy adding a tough of neon into your bedroom? Then why not take housebeautiful.com’s suggestion and try an LED rainbow light? If you’d rather stick to the light fixtures you have, get the same effect by fitting them with a rainbow light bulb – it’ll light up your room like a Christmas tree.

Forget about tasteful landscapes and dull portraits. When it comes to art in the rainbow bedroom, you want something big, bold, and eye-catching. A colorful wall hanging or tapestry will do the job nicely. You don’t have to stick to one’s embroidered with rainbows, either – providing it’s an explosion of color, you can go for any motif you like.

The one word you probably didn’t expect to see here today was ‘neutral’. But even the rainbow bedroom has a place for a bit of tasteful restraint. If you want to introduce a more grown up take on the rainbow theme, look for pieces that incorporate rainbow motifs, but which introduce them in a tonal way. As well as helping to keep the room grounded, the neutrals will let the rest of the colors you introduce elsewhere really sing.

Nothing will ruin the look of a gorgeously colorful rainbow bedroom faster than something old, dark and dingy hanging at the window. Let the natural light shine through with some airy cotton or voile drapes. You’ll find no end of color options on the market, but a curtain with a graduated color effect will look particularly spectacular.