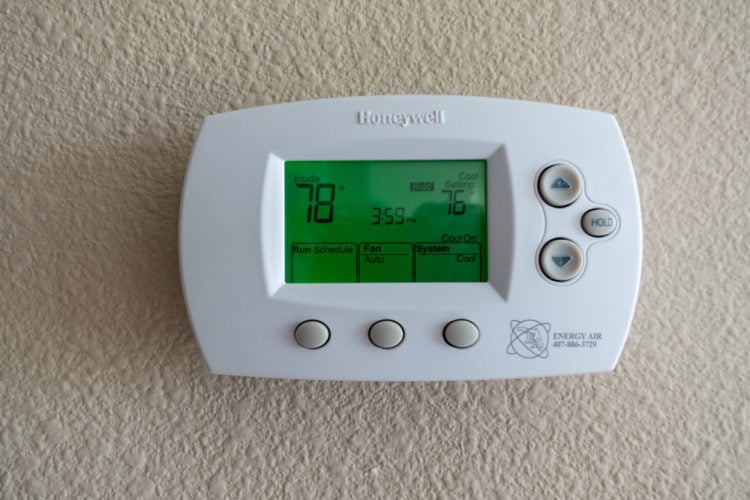 If you have a programmable digital thermostat such as a Honeywell thermostat, you might be wondering how to reset it. These types of thermostats are amazing because you can literally program them to keep the house at a certain temperature during one part of the day, and then kick in to keep it either cooler or warmer during another part of the day. That allows you to save energy costs by keeping your home more comfortable when you are actually present in the home as opposed to just running it at the same temperature all day long. At the same time, you don’t have to worry about coming home to a house that is boiling and/or freezing. The problem is, these thermostats are just like laptops, tablets and smartphones. From time to time, they crash. When they do, they have to be reset in order for them to function again. If you know what you’re doing, this can be done in a matter of minutes but if you’ve never done it before, the whole process can be an exercise in absolute madness.

Fortunately, this is something that Honeywell has realized over the years. As such, they have genuinely gone out of their way in an attempt to make resetting their thermostats as easy as possible. Therefore, if you have one of the later models such as a T5, T5 + or T6, the process is relatively straightforward. The first thing you should do is make sure that the device is powered on and then locate the menu button and hold it for five seconds. A menu will then come up that allows you to scroll through it. You’ll want to select the reset function and then, ask the thermostat to go back to factory settings. There will be a message that appears on your thermostat, asking you whether or not you are sure you want to do this. Don’t let that scare you. Simply click “yes” and your thermostat will be reset to its original factory settings. From there, you can go in and customize it the way that you had done previously.

What About Other Models?

If you have an older model that doesn’t allow you to reset it in this manner, there is something you can try. However, it’s worth saying that you really should know the model number of the thermostat in question. This will allow you to get more accurate information from the company itself regarding the proper method to reset your thermostat. If that isn’t possible or if every other method that you have tried has failed, you might want to give a tried-and-true method a chance to work. You know how when your smartphone stops working and you don’t know what else to do, you simply turn it off and leave it alone for a while, only to turn it back on and realize that it’s now working normally? You can do something similar with some Honeywell thermostats. The process is a bit different, but the end result should be the same. Remove the thermostat from the wall and take the batteries out of it. Leave the thermostat alone for about three minutes, then reinsert the batteries the wrong way. In other words, put the batteries in so that the negative terminal of the battery is facing the positive terminal of the thermostat and vice versa. Allow it to sit there for another two to three minutes. After that, remove the batteries and reinsert them properly. If you’re lucky, the thermostat will be reset during this procedure. If you’re not so lucky, you have no other recourse but to learn the model number of the thermostat and go from there, as the reset procedure can be different depending on the model in question. This is especially true when you’re talking about some of the older models that aren’t as easy to reset as the newer ones.

What if you don’t have a T5, T5+ to T6 thermostat and you’ve tried the procedure with the batteries, only to reinstall them and find that the thermostat still had not been reset? There is one more thing that you can try. In fact it’s crucially important that you don’t overlook this step. Check to see if your thermostat is hardwired into your home’s electrical system. You will be able to tell when you pull the thermostat away from the wall because if it is, there will be a wire that attaches it to wires coming directly out of the wall. If you find this, pull the batteries out of the thermostat and then find the breaker in your home associated with the thermostat itself. Turn the breaker off, completely cutting any and all sources of power to the thermostat. Allow it to sit there for several minutes and then put the batteries in as described in the paragraph above. Give it a few more minutes, pull the batteries out and reinstall them properly. Next, turn the breaker to the thermostat back on. This should fix the problem if you tried the technique with the batteries first and the thermostat failed to reset. It’s not surprising that your thermostat will need to be reset from time to time. Unfortunately, it is part of the territory when working with all kinds of smart devices. Regardless of how new the device in question might be, there are times when they just don’t function the way they were designed to perform. Most of the time, a simple reset is all that’s needed. If you do try these techniques and they work, then you’re all set. On the other hand, if you’re one of the few individuals that tries them with little or no success, it may be time to call a technician to come out and have a look. Fortunately, that isn’t something that happens very often. More often than not, it’s easy to reset these thermostats with just a few simple steps and a couple of moments of your time.