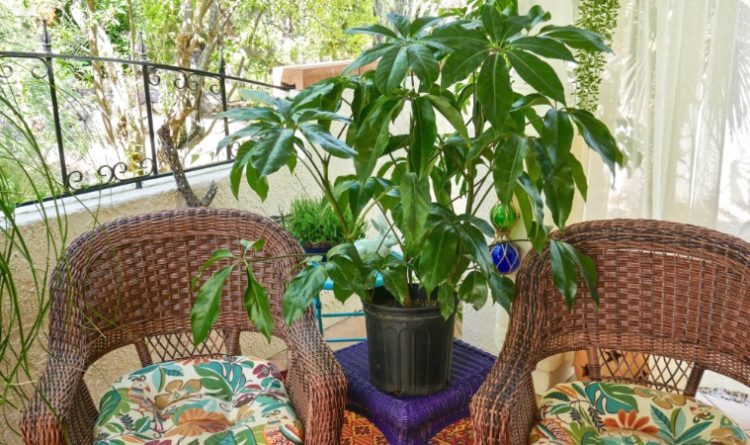 Coming from a tropical environment, Schefflera plants are also known as Umbrella plants. The larger variety features long, oval-shaped leaves that droop in a graceful manner from the stalk in a manner of an umbrella canopy. Mature Schefflera plants might possess from a single stalk 12 up to 16 leaflets while the immature plants will only have between four and six leaflets. Next to other plants from tropical regions, the Schefflera will probably thrive. They flourish in the outdoors – if you plan on keeping the plant in your home, it isn’t likely to bloom.

How to Grow Your Own Schefflera Plants

In spite of their tropical origins, the Schefflera plants are not that difficult to grow. You just need to provide the plants with plenty of indirect light, some warmth, and general humidity. For colder climates, it will probably be necessary to provide the plants with bottom heat. If you buy a rather Leggy Schefflera plant, it will be necessary to prune it to produce one that is fuller, more vibrant. Unfortunately, while the Schefflera are rather easy to grow as long as they have the right conditions, they are susceptible to pests. The Schefflera is vulnerable to aphids, mealy bugs, and spider mites, but there is also an insect known as the scale which can pose a threat to the health of your Schefflera.

Schefflera prefer light that is bright, and yet indirect. In the summer, it may be necessary to move the Schefflera to a shady overhang. If you have a Schefflera plant which is becoming floppy, leggy, it could mean the plant is not getting a full amount of light. For the houseplant Schefflera, you should never place the plant anywhere near direct sunlight, the leaves will burn from exposure to the full sun.

Soil conditions to grow the Schefflera

The best soil to plant the Schefflera is in a rich, loose potting media with moist compost to help encourage it to grow, but you can also try using a well-draining sandy loam variety of soil with an acidic to slightly alkaline pH. However, they do not like being planted in soil which has become too wet or too waterlogged.

It’s best to water the Schefflera weekly during the plants growing period while spraying the leaves frequently as well. If the soil dries out in the pot, which you can wait for if you wish, you can then soak the soil with water. During winter time, the water can be cut back. Overwatering the Schefflera will kill it, and people do it all the time. You can, however, tell if you’re overwatering the plant – the leaves will turn yellow and fall off.

The Schefflera is a tropical plant and therefore it appreciates humidity and tropical temperatures, and it will suffer in temperatures below sixty degrees. They should never be exposed to drafts or to dry heating vents. Schefflera that are cold and haven’t had that much water will begin to drop its leaves very quickly, so owners should take this leaf dropping seriously and correct the issue of temperatures and water. If the Schefflera loses all of its leaves but you want to save it, move it outdoors in springtime, giving it lots of water to recuperate.

Owners of Schefflera should give their plants feeds of liquid fertilizer twice a week during the plants growing period, though they also have the choice of using slow-release pellets in two applications. Schefflera are heavy eaters and will appreciate the extra nutrition.

Schefflera plants should be repotted annually when it is needed. Mature plants will grow into small trees reaching between twelve and fifteen feet in height, though indoor plants will stop at around six feet. The growing period can be slowed down by prolonged repotting.

The plants will need to be pruned occasionally, especially when it is certain it isn’t getting enough light. When it comes to pruning the plant, cut off the bits you feel are overgrown or appearing leggy, but keep in mind the Schefflera plants will recover quickly from the pruning. The result will be a fuller and lusher plant.

Schefflera plants are toxic to cats, dogs, and humans. It contains calcium oxalate crystals which can cause oral irritation, a burning sensation and irritation in the lips, tongue, and can cause excessive drooling, vomiting, and can even cause problems for breathing. The toxicity only occurs when the leaves have been eaten. Keep animals and children away from the plants.

10 Plants That are Perfect For Your Front Porch