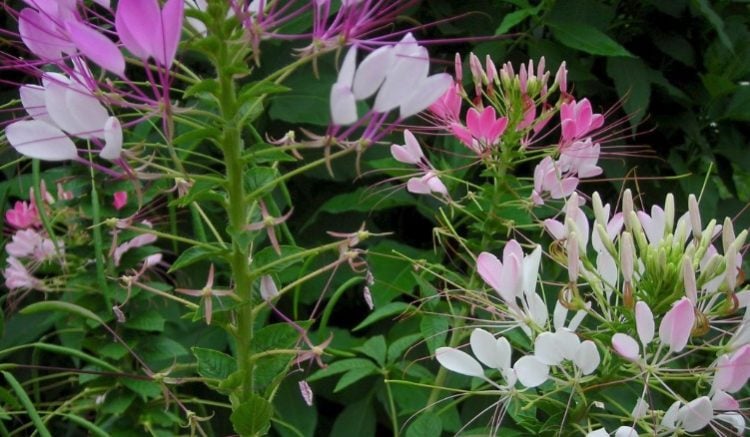 Regardless, annuals in the genus Cleome see a fair amount of use in a wide range of home gardens cared for by a wide range of home gardeners. This might come as a surprise for those who have seen such plants in their nurseries but passed over them because of their unimpressive appearance. However, it is important to note that spider flowers are capable of making a great impression on those who see them once they have managed to bloom, which tend not to happen until they have managed to become well-established.

For that matter, it should be mentioned that spider flowers have a number of other upsides that might make them interesting for home gardeners. For instance, they are low-care and low-maintenance plants, thus making them an excellent choice for people who want something hardier for their home gardens. Moreover, spider flowers come in various colors that make it possible to pair them with a wide range of other annuals for a better effect than what either option can achieve on their own. On top of that, spider flowers can rise to a height of about three to four feet, which makes them very well-suited for playing the role of focal points in home gardens that are otherwise dominated by annuals that are lower to the ground.

Here are some things that people should keep in mind when growing spider flowers in their home gardens:

Light is needed for spider flowers to germinate. Due to this, there are two good times to sow the seeds. First, there is when there is no further need to be fearful of frost. Second, there is the autumn, which is meant to ensure that the seeds will germinate once conditions become warmer following the winter.

Generally speaking, spider flowers do their best when planted in places that will receive the full force of the sun. This isn’t because this will make for the biggest spider flowers. Instead, spider flowers grow their biggest in shade, so much so that they will run the risk of toppling over because of their height.

Spider flowers will be fine in nothing more than average garden soil. In fact, it should be mentioned they are considered to be drought tolerant plants, thus making them excellent choices for people seeking to cut down on their use of water. For that matter, for further reductions in this regard, considering using a 3-inch layer of organic mulch for their planting beds. Otherwise, there is no need for either fertilizer or pest control because spider flowers are pretty hardy plants.

Perhaps unsurprisingly, spider flowers don’t do so well when they are exposed to colder temperatures. Under ideal circumstances, they should see 80 to 85 F during the day-time and 68 to 70 F during the night-time. Moreover, they need to have this rise and fall in temperatures because that is critical for their normal development. Given these numbers, it stands to reason that spider flowers aren’t even a little bit frost-resistant. However, once they have grown up, they can stand having the temperatures be a little bit cooler.

As far as humans are concerned, spider flowers emit no detectable fragrance. However, the same can’t be said for other species, which is why interested individuals can expect both butterflies and hummingbirds to show up in the right climates. For that matter, they might be able to see hummingbird moths as well.