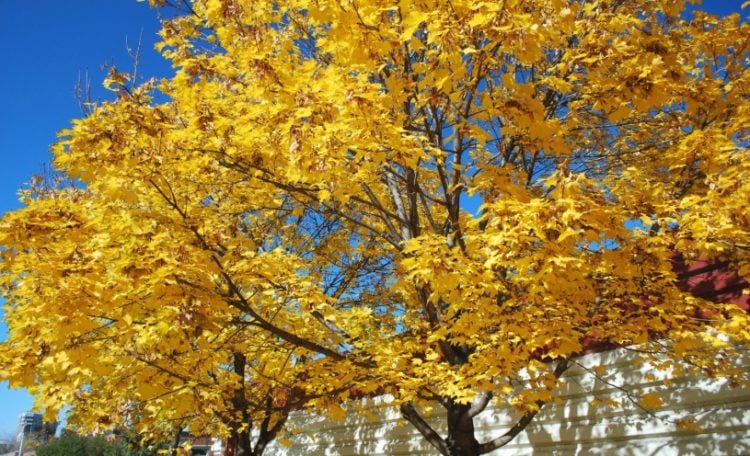 The Acer family of maple trees includes a wide variety of sizes, colors, shapes, and growing habits. There are two main groups of maples including hard and soft. The hard maple trees generally live a long time and grow very slowly. These include the sugar maples which produce everyone’s favorite maple syrup. The soft maple trees grow rapidly, and this makes their wood soft, branches brittle, and subject to rotting.

All maple trees have leaves which are divided into lobes. Some have three, some have five, and some have seven lobes. All maples also produce samaras, which are winged achenes. An achene is a dry single seed which is basically the tree’s fruit; which has a hard, outer wall enclosing one seed. When they have wings, as they do in maple trees, each one is called a samara. The winged seeds float down toward ground level once they ripen.

The glorious part about Maple trees is that their leaves generally turn spectacularly red, orange, and yellow once Autumn rolls around, and this gives a splendid pop of color for a home landscape. They are magnificent when the seasons change. The most popular also can be tapped for maple syrup, which could be a bonus for a family who enjoys taking on challenges. Red maple trees can grow to more than 100 feet in the wild, but with cultivation they may reach 40 to 60 feet tall and 25 to 35 feet wide. Their foliage will be bright red, orange, or yellow color during the fall months, and they grow quickly. Their bark is a silvery color. For a bright pop of incredibly beautiful scarlet during the fall months, October Glory or Autumn Blaze are two outstanding choices for landscaping. This maple does well in most kinds of soil but will struggle with drought conditions. For families who are interested in learning how to harvest sap to make maple syrup, these are great choices to plant. Keeping in mind that it can take up to forty gallons of sap to produce one gallon, this is a labor-intensive project for the hearty. There are Sugar Maples which produce golden or reddish orange foliage in the fall, and these are truly spectacular. They make excellent shade trees as well because they’ll generally grow gradually to reach about 60 feet tall and grow into a rounded or oval shape. They will also grow anywhere from Vermont to Texas, depending on the selection. Green Mountain or Legacy grow well across a wide range of states, but Caddo does particularly well in the South with dry, alkaline soil. This tree will grow to provide an enormous canopy, so it’s best for homes situated on very large properties. It’s not a tree to plant near the house, but it will give shade in an area designated for gathering underneath it. It is a sub-species of sugar maple and will produce maple syrup well. It grows more slowly than the Red Maple but rivals it in terms of brilliant yellow to orange color in the fall. The Black Maple will grow to anywhere from 40 to 80 feet tall and 40 to 60 feet wide. When looking for a moderately-sized maple, the Amur provides beautiful red and orange colors in the fall. It will grow to a height and width of just 15 to 20 feet, making it an ideal tree to plant in a garden area. It can tolerate harsh climates. It also flowers with pretty, yellow-white blooms from April to May. Because it produces many samaras that disperse widely on the wind, its often found on invasive species lists. These ornamental trees grow slowly to an upright shape approximately 6 to 8 feet tall when cultivated, but they can grow in the wild to heights of 50 feet. They’re known for growing more than one trunk. They’re also known for growing wider rather than taller. Their leaves can be green, red, or burgundy; only to blaze into scarlet orange, or yellow by the time that late fall arrives. Excellent choices include Glowing Embers, Bloodgood, Sango Kaku, or Emperor I.