Home
Interior Design
Kitchen
What Does that Burning Smell from the Dishwasher Mean?
Prev Article Next Article 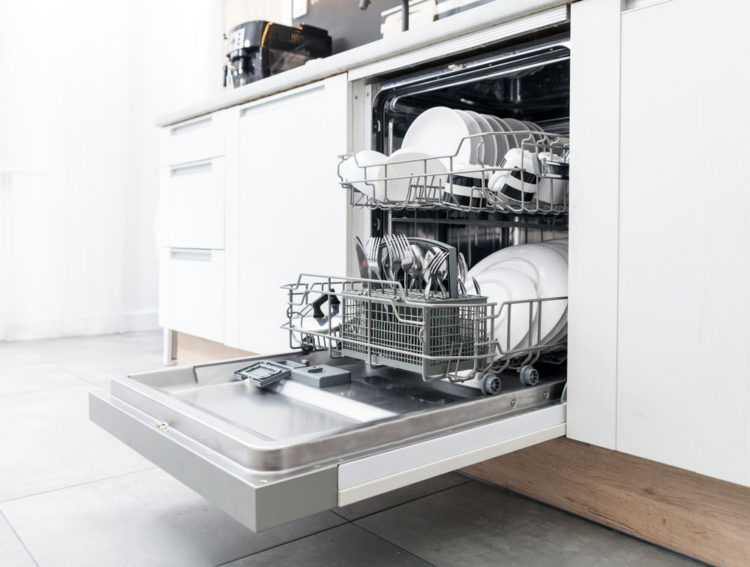 A burning smell coming from any kitchen appliance is always worrying, but just how concerned should you be if that smell is coming from your dishwasher? Ultimately, it depends on what’s causing the smell in the first place. The good news is that it’s not always a sign of a major issue. In many cases, it could be something as simple as a piece of trapped plastic by the heating element or a build-up of grime. Occasionally, however, it could point to something more serious like a problem with the motor. Regardless of what it is, the sooner you find out and fix whatever it is that need’s to be resolved, the better. Here’s what you need to know about what could be causing that burning smell from the dishwasher, and what you can do to get rid of it.

As Hunker.com notes, one of the most common causes of a burning smell coming from a dishwasher during a drying cycle is a problem with the heating element. Once the dirty dishwasher has been drained through the drain hose after the wash cycle has finished, the electric heating element kicks in to provide the heat needed to dry the dishes. If a piece of plastic like a plastic utensil or food container gets trapped against the element (which is located a few inches above the base of the cabinet at the back of the dishwasher), it may omit a smell of burning. If there is nothing trapped against the element, the burning smell could be a sign that the heating element is failing. If the dishwasher is brand new, the heating element may still be covered in the plastic wrap that manufacturers sometimes use to prevent the element from becoming damaged during shipping.

Although it’s relatively rare for a dishwasher motor to fail, it can sometimes happen. If it does, the dishware will smell as normal during the wash and rinse cycles but will start to produce a burning smell during the drying cycle. Although some problems might arise in isolation, it could also be a widespread manufacturing problem. In case it is, it’s worth checking if a recall is in place.

Dishwashers aren’t self-cleaning. If they aren’t cleaned regularly, a layer of grease and food debris can build up. During the drying process, the grease may heat up and start to smell like it’s burning. If the debris is substantial enough, it may even have clogged the drain hose, spray arm, or filters, all of which can result in noxious odors.

How to Get Rid of a Burning Smell from Your Dishwasher

Although most burning smells that come from a dishwasher can be easily explained and just as easily resolved, the sooner you find the cause and fix the problem, the sooner you can put your mind to rest. Here’s what to do.

One of the most common causes of a malodorous dishwasher is a build-up of dirt and grime. Although the smells are likely to be masked during the wash cycle, they can start giving off a whiff of burning when the dishwasher enters the drying cycle. The best way to prevent the smells from developing in the first place is to wipe down the inside of the dishwasher on a regular basis with warm, soapy water. The filters should also be cleaned out every couple of months. If your dishwasher is already gunged up with enough food debris and grime to make a smell, put it through an intense clean with one of the following cleaning methods:

Baking soda is an amazingly effective cleaning product that can help shift even stubborn grease build-up while also working to absorb and eliminate unpleasant odors. To tackle a smelly dishwasher, sprinkle a cup of baking soda onto the base of the cabinet. Add half a cup of lemon juice to maximize the deodorizing and cleaning properties of the baking soda and run the dishwasher on an empty cycle. Do this once every month to keep smells at bay.

White vinegar makes a great all-purpose cleaner than can help break up grease and flush away dirt. Simply add a cup of distilled white vinegar to the base of the machine and run it on an empty cycle. To maintain the results and keep your dishwasher free of smells, repeat the process once or twice a month.

Check the Filter and Hose

Drain hoses and filters can easily become clogged over time. If you’ve cleaned your dishwasher and checked the heating element but the smell of burning is still there, you’ll need to remove the filter and clean it. Once it’s clean, keep it that way by repeating the process every couple of months. If that doesn’t fix the problem, you’ll need to remove the hose and check it for clogs.