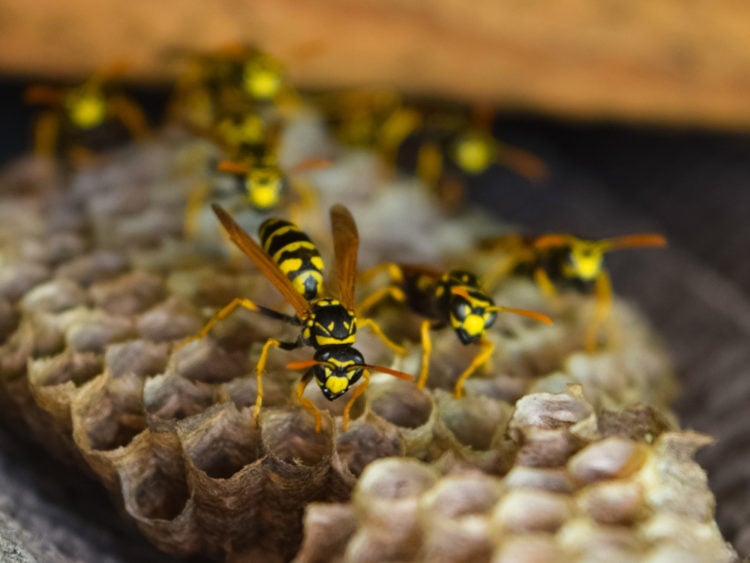 Hymenoptera is an order of insects that includes more than 150,000 living species. It isn’t clear why Hymenoptera is named Hymenoptera. The latter part comes from the Greek pteron meaning “wing.” Meanwhile, the former part is believed to have come from one of two things. First, it is possible that the hymen refers to the order’s membranous wings. Second, it is possible that the hymen refers to Hymen, an ancient Greek god of marriage because the order’s forewings and hindwings are “married” together by a series of hooks. Regardless, Hymenoptera is huge, meaning that it encompasses well-known species such as ants, bees, wasps, and sawflies. Out of these, ants, bees, and wasps are collected under a suborder of insects called the Apocrita. Interested individuals can distinguish them by the narrow “waist.” Something that is believed to have evolved for the purpose of facilitating their common ancestor’s parasitic lifestyle. In any case, ants and bees make up a huge proportion of the Apocrita. Meanwhile, wasp is a term that encompasses every single species in the Apocrita that is neither an ant nor a bee. As such, it should come as no surprise to learn that one kind of wasp can be very different from another kind of wasp.

How Can You Identify the Queen Wasp?

Identifying the queen wasp is much easier in some seasons than in others. For example, if interested individuals see a solitary wasp moving about in spring, there is a good chance that it is a queen wasp that is foraging for the purpose of feeding the first workers. This is necessary because they don’t automatically come with a set of workers to take care of them, meaning that they need to get their nest up and running on their own. Eventually, those first workers will mature, thus enabling the queen wasps to focus on producing more wasps. Similarly, if interested individuals come upon a solitary wasp in the wintertime, there is also a good chance that it is a queen wasp. This is because they tend to hibernate so that they are ready to go once their surroundings warm up. The problem is that it can be quite difficult for interested individuals to find queen wasps during this period, seeing as how they like to hide in cracks, crevices, and other hiding spots that will protect them from the full force of the cold. As for the other wasps, well, suffice to say that a lot of species see the old queens, the drones, and the workers die off during the winter because they aren’t meant to make it past the season.

Why Does This Matter?

Identifying the queen wasp can be very useful for someone who is looking to keep their local wasps under control. For example, if they can eliminate the queen wasp during the spring, they have a good chance of preventing the wasp nest from getting started because the queen wasp wouldn’t have had the time to lay a lot of eggs. This is particularly true if the queen wasp is still on her earliest set of workers, which won’t be able to feed themselves until they have matured. Similarly, if interested individuals can eliminate the new queen wasp during the winter, they can prevent the formation of a new wasp nest because the new queen wasp is the sole survivor in a lot of species. In contrast, if interested individuals somehow eliminate a queen wasp during the rest of the year, they may or may not get good results because there are already worker wasps. On top, any such action could very well aggravate the remaining wasps, which could be an issue. In any case, if interested individuals want to eliminate a wasp nest, they might want to call in a professional with the right expertise, experience, and equipment. Getting attacked by a swarm of eusocial wasps is no fun. Moreover, it is best to entrust such tasks to someone who is consistently capable of identifying their target rather than just giving it their best shot. At the end of the day, no one wants anything nesting or making a home in or around their own home whether it’s a wasp or ants, or if it is something else.