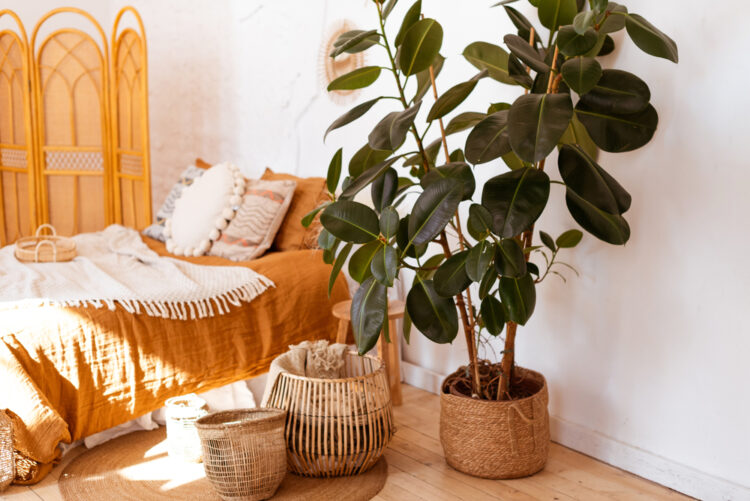 Ficus refers to both ‘the weeping fig,’ which is a small, lovely, and leafy tree houseplant, and the genus that the tree belongs to. The Ficus tree shares the genus with around 900 species of plants, including vines, trees, shrubs, and plants that belong to the botanical family Moraceae. While most of these plants are big trees that must be grown outdoors, can the houseplant weeping fig survive outdoors? Read on to know if a Ficus tree can survive outdoors.

Ficus is a Latin name that means a fig. Therefore, don’t be surprised to get several fig trees in this botanical grouping. The genus is highly versatile, including fruit-producing trees (Ficus carica), outdoor species such as the gargantuan banyan (Ficus benghalensis), and Indian laurels (Ficus macrocarpa). A variety of this Ficus genus is generally grown indoors, such as the rubber tree (Ficus elastica), fiddle-leaf fig (Ficus lyrata), and the familiar weeping fig scientifically referred to as Ficus Benjamina. Ficus trees meet most of the homeowner’s plant indoor needs both in the interior design and landscape.

So, Can the Ficus Tree Survive Outdoor?

Yes! It’s possible to typically grow indoor Ficus plants such as the weeping fig outdoors if you stay in a warm climate without the winter freeze. While Ficus trees are often seen as leafy and beautiful container trees for a large indoor living room, they can conveniently be grown in warm areas. Ficus trees varieties are famous in parts of California and Arizona, where they grow up to 50 feet tall and wide. The weeping fig Ficus plant, leafy and of manageable size indoors, can grow much taller outdoors, and the roots take advantage of the extra space to explore and travel in a way that might be damaging. The weeping fig Ficus tree is originally from the tropical areas where it conveniently grows outdoors. The weeping fig can flourish outdoors in warm-winter regions, categorized in the U.S. Department of Agriculture plant toughness zones 10,11 and 12. The tree does well in an average temperature of about 65- and 80-degrees Fahrenheit. These favorable conditions are available in some coastal areas in California and other areas such as Arizona, Florida, Texas, and Hawaii.

Although you stay in a sufficiently warm region to grow weeping figs outdoors, you might want to think twice before digging the hole in the backyard soil. The weeping figs are very graceful indoors and grow under six feet tall; these trees grow much taller outdoors. They can even grow up to 60 to 100 feet if left to their own devices. Additionally, the roots of the weeping fig can be very destructive and aggressive if not restrained in a container. These roots are pushy and robust enough to cause massive destruction to a driveway, structure, or sewer system. You can conveniently grow the tree outdoors without the risk of the roots spreading and becoming destructive by growing it in a container. The container will contain the roots as well as limit the height of the plant. However, if you consider planting the tree in the soil, ensure you conveniently locate where it can thrive to its mature height and where the roots won’t trouble anything. Outdoors, the weeping fig will only survive in well-drained soil and prefers indirect bright light.

How To Care for Your Outdoor Ficus

To survive outdoors, weeping figs enjoy similar dappled sunlight they prefer when growing indoors. However, you can also plant them in areas with up to six hours of direct sunlight. If you are transferring an indoor Ficus tree outdoors, you will require to slowly adapt the tree to brighter sunlight by increasing its sunlight exposure a little each week. Weeping figs thrive well in well-drained soil that has medium fertility. After transplanting, you will need to water the tree weekly and gradually cut it back as the plant fine-tunes to the new environment. Remember that excess or too little water can cause yellow leaves. In the case of dry conditions, the tree sheds its leaves to survive as it won’t have sufficient water to support the leafy canopy. If you are hoping for quicker growth, you can consider applying a balanced fertilizer in spring with half a cup of 10-10-10 fertilizer on each tree. However, fertilizer is not vital to the health of the tree. Also, if you will be planting the outdoor Ficus tree in a container, replace the soil in the container every two to three years because the soil losses nutrients over time. This will ensure the tree remains happy.

Can Cold Cause Damage to The Ficus Tree

If you stay in a region where frost can sometimes happen but usually doesn’t, the outdoor weeping fig or other Ficus trees should be okay during the winter season. Cover the Ficus tree in protective materials such as a sheet to minimize the frost damage when a frost nears. At zero degrees Celsius, the leaves and branches will be frost burnt. However, the Ficus tree will probably survive if it has a trunk bigger than eight inches. After the frost, you will need to prune the tree to remove damaged leaves and branches.

Weeping figs can be choosy plants. The common name originates from the fact that they shed their leaves when there is a change in the environment, such as the transitioning to warm indoor temperatures from cool outdoor temperatures. You can address this by taking the plant indoors before the outdoors become too cool and keeping them away from heat drafts or vents. Ficus trees also face the problem of insect attacks. Spider mites and scale insects often drain sap from the plant, leaving a sticky residue. To treat the tree, start by pruning the highly infested parts of the tree and treat it with refined horticultural oils and insecticides.

Generally, the Ficus tree can survive outdoors, particularly in warm regions. Hopefully, you can successfully grow your ficus tree outdoors with this guide. Keep in mind that outdoor ficus can cause damage due to its massive spreading root system, so ensure you carefully choose where to sit them.